The Onslow Ford Memorial had not been maintained for many years, consequently the bronzes had developed a natural green patination and active corrosion in places. 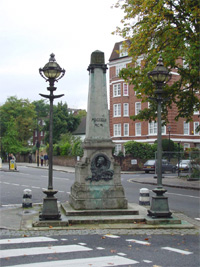 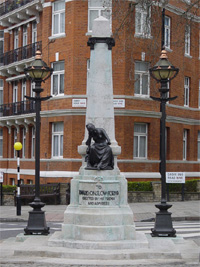 The stone elements were stained and the associated bronze and copper lamp standards were in poor condition. 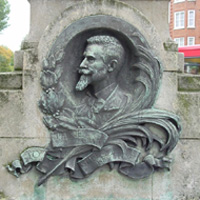 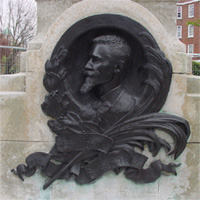 Deep copper staining on stone plinths is often impossible to remove completely after years of neglect, however the appearance of the memorial was greatly improved by the conservation work, and the monument was put into sound structural and surface condition. 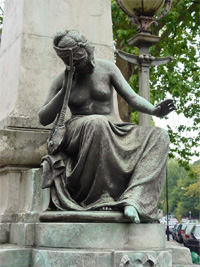 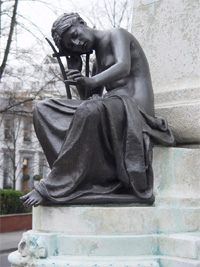 Edward Onslow Ford (1852 – 1901), commemorated in this memorial was an English sculptor, born in London. He received some education as a painter in Antwerp and as a sculptor in Munich under Professor Wagmuller, but was mainly self-taught. His first contribution to the Royal Academy was in 1875. He gained the open competition for the statue of Sir Rowland Hill, originally erected in 1882 outside the Royal Exchange, and followed it by others including the colossal memorial statue of Queen Victoria (1901), for Manchester, which was less successful. Ford's influence on the younger generation of sculptors was considerable, and of good effect. His charming disposition rendered him extremely popular, and when he died this monument was erected to his memory  in St John's Wood, near to where he lived.

Andrea Lucchesi, (1860-1925), the son of an Italian sculptor, was born in London and attended the West London School of Art before beginning at the Royal Academy Schools in 1886. Together with his peers, such as William Reynolds-Stephens, Henry C. Fehr, William Goscombe John and their influential teacher, Alfred Gilbert, Lucchesi formed part of a new movement which fought to free itself from the rigidly academic conventions of the mid-nineteenth century, and began to produce a new, Iyrical kind of sculpture that made use of Symbolist imagery.