STATUES IN THE CITY OF LONDON

Location: Throughout the City of London

We have conserved and regularly maintain many bronze public sculptures for the City of London, some of which are illustrated below. 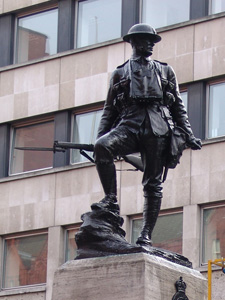 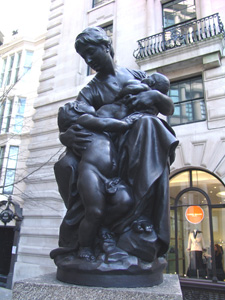 Above left: The Royal Fusiliers City of London Regiment Memorial, by Albert Toft, 1920

The sculptor Albert Toft (1862-1949) was born near Birmingham, where his father was principal modeller at Elkington, later moving the family to Staffordshire to work for Wedgwood. Young Albert Toft also went to work for Wedgwood, studying at the art school in Henley in the evenings, and then at Newcastle under Lyme. In 1881 he commenced study in London at the National Art Training School, under Lanteri. He set himself up with a London studio, producing first bas-reliefs and apparently doing some black and white work, and then turning to portrait sculpture. From the late 1880s he also made ideal works, rather influenced by Alfred Gilbert. Toft also designed other memorials, most notably the Welsh National Memorial in Cardiff, and in Birmingham, the South Africa Memorial in Cannon Hill Park and the King Edward Memorial in Highgate Park, as well as figures outside the Birmingham Hall of Memory. He produced three Queen Victoria memorials, in Nottingham, Leamington and South Shields.

Dalou first exhibited at the Paris Salon in 1867, but when implicated in The Commune in Paris, he took refuge in England in 1871, where he rapidly made a name through his appointment as a tutor of modelling at South Kensington. There he laid the foundation of the development of the modern British school of sculpture, and at the same time executed a remarkable series of terra-cotta statuettes and groups, such as A French Peasant Woman, of which this sculpture is a bronze version. He returned to Paris in 1880. Above: Icarus III - Variant I (left) and The Minotaur (right) by Michael Ayrton, both 1973

British artist, Michael Ayrton (1921-1975), worked in many genres, such as painting, sculpture, stage design, writing, illustration, and broadcasting. Despite his frequent battles with illness, he travelled extensively and had a prolific career. A large majority of Ayrton's work was centred on the myth of Daedalus and Icarus. 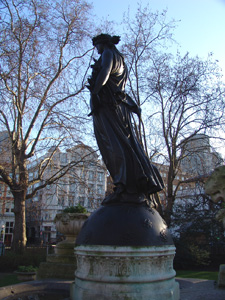 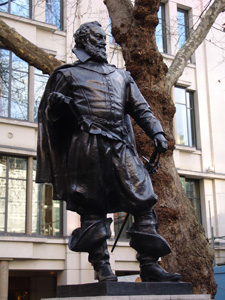 The sculptor John Birnie Philip (1824-1875) exhibited at the Royal Academy from 1858 almost every year until his untimely death of bronchitis at the age of 48. He received a number of commissions for public sculpture, most importantly for the podium frieze on the Albert memorial, where he was responsible for the representations of architects and sculptors, as well as allegorical statues of geometry, philosophy, geology, physiology, and the angels on the spire. His style tends to the serious, with his female figures stern and solid rather than beautiful but his compositions can be graceful, and a particularly elegant example of his work is this fountain girl. An example of his non-figurative architectural work is the decoration on the piers of Blackfriars Bridge.

Above right: Captain John Smith by John Renwick, 1960, based on an original by William Couper, 1907

William Couper (1853-1942) was one of the most noted American sculptors of the late 19th through early 20th century. His sculptures can be seen in numerous public places, institutions, and museums both nationally and internationally. 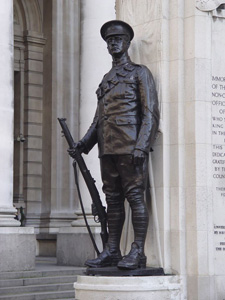 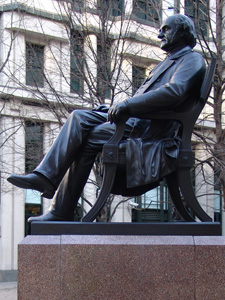 Above left: The London Troops Memorial by Alfred Drury, 1920

Alfred Drury (1859-1944) was a key artist of the New Sculpture movement. He was born in London, and studied first in Oxford, and then at the National Art Training School, South Kensington. He was there when the French sculptor Dalou came to teach there, and went with him back to Paris to work in his studio for some four years. Later that year, he returned to London, where he was an assistant to J. E. Boehm. He became a full Academician in 1913. In his subject matter, Drury produced good masculine portraits, and had a speciality in children, as ideal portraits and cherubic pieces, also introducing them in allegorical compositions. In London, his three major works are sculpture on the Old War Office in Whitehall and the front of the V&A, and the four huge figures on the downstream side of Vauxhall Bridge, all featuring characteristic allegorical female figures, his favourite subject.

Above right: Statue of George Peabody by W.W. Story, 1868

William Wetmore Story (1819-1895) was an American sculptor, art critic, poet and editor. He moved to Italy in 1856 after receiving a commission for completing a bust of his late father (jurist Joseph Story). Story's home, in the Palazzo Barberini, became a central location for Americans in Rome. 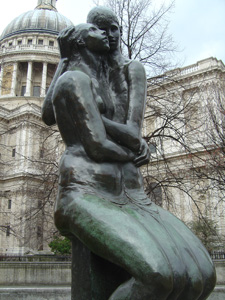 George Ehrlich (1897-1966) was born in Vienna and trained as a painter at the Kunstgewerbeschule, but turned to sculpture in the late 1920s and emigrated to London just before the Second World War. In England much of his work was devoted to animals and small children.

Above right: Memorial to John Heminge and Henry Condell (The Shakespeare Monument) by Charles J. Allen, 1895

Charles John Allen (1863-1956) was born in Greenford, Middlesex, and studied at the Lambeth School of Art, South London. He was then apprenticed to Farmer and Brindley of Westminster Bridge Road, the well-known manufacturers of architectural sculpture, where he made wood and stone carvings. In 1887 he attended the Royal Academy Schools, and in 1890, while in his second term, became studio assistant to Hamo Thornycroft, remaining with him for four years. In 1895 he was appointed Instructor in Sculpture and Modelling at Liverpool School of Architecture and Applied Arts. Allen's chief work was the Queen Victoria Memorial in Derby Square, Liverpool (1902-5), and he also made other architectural sculpture in the same city. Early work by Allen, when he worked for Powell & Sons, includes a marble reredos at St Paul's Cathedral. 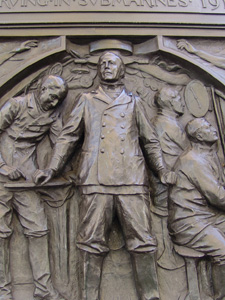 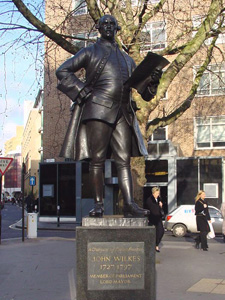 Above right: Statue of John Wilkes by James Butler RA, 1988

James Butler was born in London in 1931 and lived most of his early life in Kent. Educated at Maidstone Grammar School and Maidstone School of Art, he then moved to London and studied for a further two years at St. Martin's School of Art and finally the Royal College of Art. He spent some ten years working as a professional stone carver and is responsible for many carvings that can be seen on buildings throughout London today, including the Queen Beasts in Kew Gardens. He was first elected a member of the Royal Academy of Arts in 1964 and is also a member of the Royal West of England Academy (R.W.A.), Fellow of the Royal Society of British Sculptors (F.R.B.S.), and a Member of the Society of Portrait Sculptors. 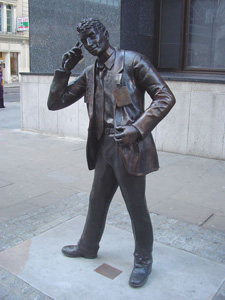 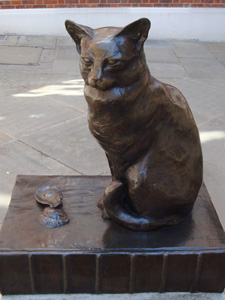 Above left: The Broker by Stephen Melton, 1997 (temporarily removed to safety during demolition and building works)

Above right: Hodge the Cat, a monument to Samuel Johnson's cat, by Jon Bickley, 1997

Hodge was one of Samuel Johnson's cats, immortalised in a passage in James Boswell's 'Life of Johnson': 'I never shall forget the indulgence with which he treated Hodge, his cat: for whom he himself used to go out and buy oysters, lest the servants having that trouble should take a dislike to the poor creature. I am, unluckily, one of those who have an antipathy to a cat, so that I am uneasy when in the room with one; and I own, I frequently suffered a good deal from the presence of this same Hodge. I recollect him one day scrambling up Dr. Johnson's breast, apparently with much satisfaction, while my friend smiling and half-whistling, rubbed down his back, and pulled him by the tail; and when I observed he was a fine cat, saying, 'Why yes, Sir, but I have had cats whom I liked better than this;' and then as if perceiving Hodge to be out of countenance, adding, 'but he is a very fine cat, a very fine cat indeed.' This reminds me of the ludicrous account which he gave Mr. Langton, of the despicable state of a young Gentleman of good family. 'Sir, when I heard of him last, he was running about town shooting cats.' And then in a sort of kindly reverie, he bethought himself of his own favourite cat, and said, 'But Hodge shan't be shot; no, no, Hodge shall not be shot.

Further reading:
Public Sculpture of the City of London, by Philip Ward-Jackson