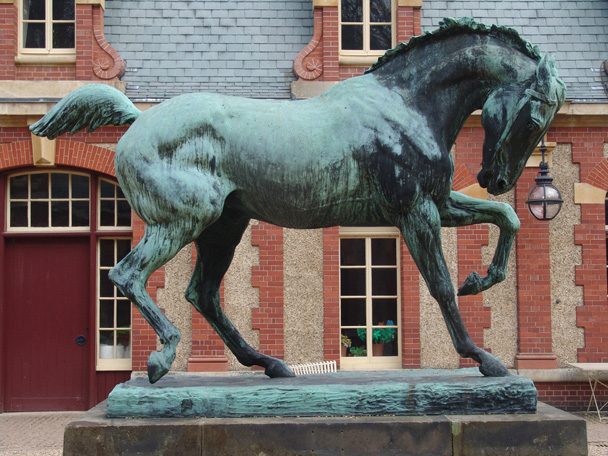 Above: The sculpture before conservation

The horse stands with two legs raised and two legs supporting the main body; these two supporting legs have steel armatures running up the interior of the legs to give it extra support.

A series of small cracks and some rust staining on the supporting legs indicated that water had been gaining access to the interior of the sculpture causing the steel armature to rust and expand, leading to a series of small cracks in the bronze. This appeared to have been happening for some time, as there was evidence of white filler in one leg and hoof. 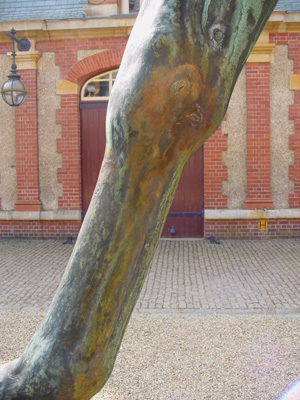 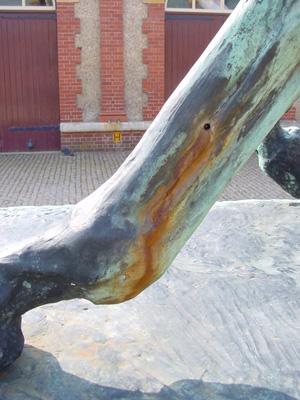 Above: Rust staining in the right fore leg and in the left hind leg, indicating water damage

There was a 4mm hole in the top of the horse's head along with a series of fine porosity holes (original casting flaws). These holes were probably the route by which the rainwater entered the interior of the sculpture. 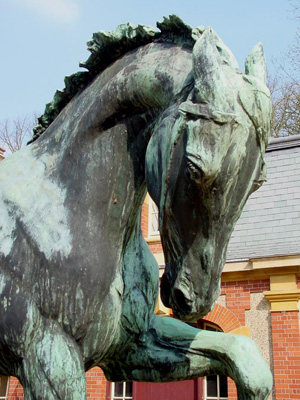 The surface of the bronze had developed a natural, green patina with heavy black copper sulphide / carbon streaking that was the result of many years of being exposed to air pollution and from lack of maintenance.

The condition of the legs was carefully monitored for some years before the decision was made to resolve the ongoing water ingress and the resulting damage to the legs by removing the horse to the studio for full conservation and repair works. 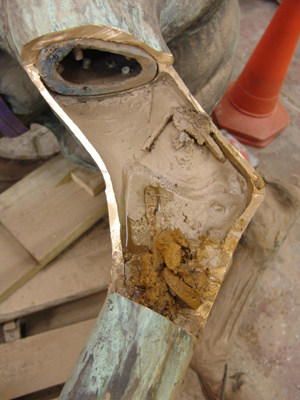 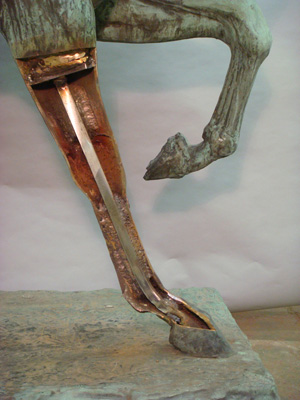 Access patches were cut in the two supporting legs of the horse to enable removal of the old steel armature, to clean out the interior rust deposits found and to dry the large amount of moisture found inside.

The rusted armature bars in the legs were replaced with a similar structure of stainless steel bar up through the supporting legs, secured to the interior of the upper leg and body. Once the armatures were secured, the horse was reconstructed, welding all cracks in the surface of sculpture, welding back into place the access patches and weld securing the horse to its bronze base. All welded and worked areas were resurfaced to match the original.

The sculpture was then thoroughly cleaned to remove airborne pollutants and the associated black streaking. Porosity holes in the sculpture surface and the hole in the horse’s head were filled. As part of the conservation works, exit holes were made in the hooves to allow any moisture which might enter the sculpture in the future to escape past the new armature and all the way through the sculpture, the armature having been designed with this in mind. 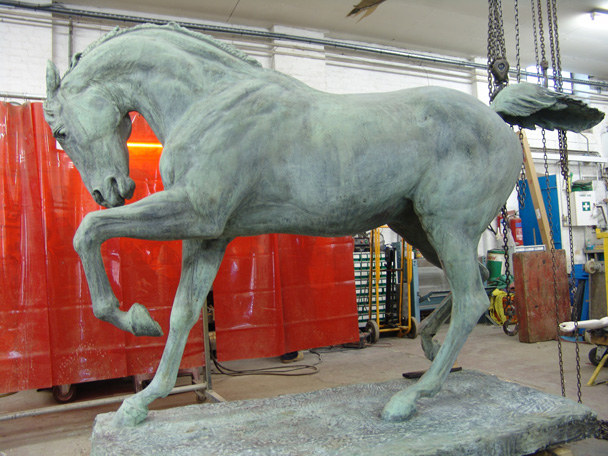 Above: The sculpture after repairs and after cleaning but before waxing

When made, the sculpture would have had a dark brown patina on the surface which over time had deteriorated into the heavy copper sulphide streaked surface. It would have been possible to repatinate to the original brown but a curatorial decision was made to retain the natural, green patina and to repatinate the worked areas green. 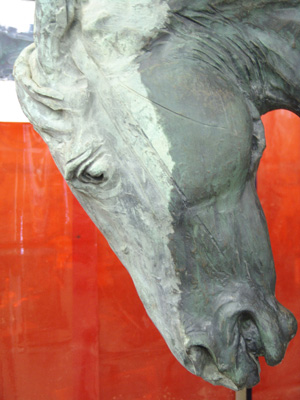 The surface was then waxed with three protective coats of clear micro-crystalline wax. The photo left shows the difference to the tone and colour of the surface made by the application of the first coat of wax. The fully waxed surface is shown below. 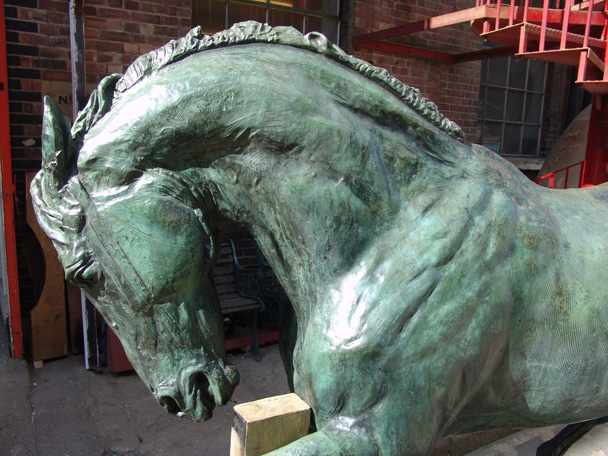 The horse was then reinstated in the stable block at Waddesdon Manor using new security fixings. 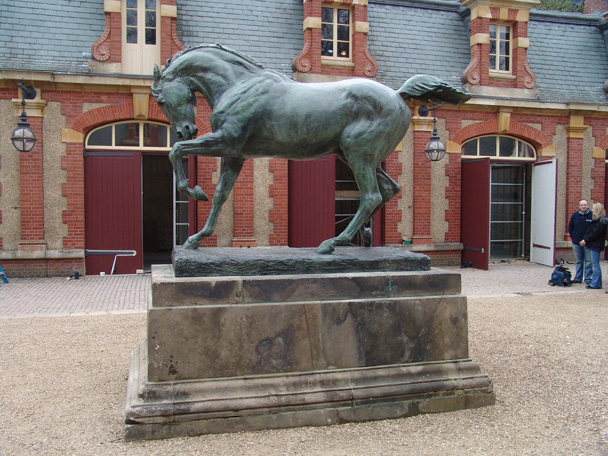 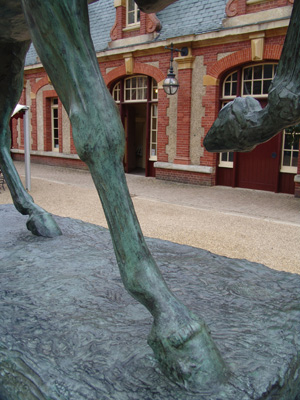 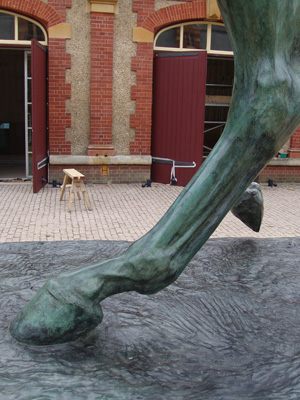 Above: The repaired right fore leg and left hind leg

Sir Joseph Edgar Boehm, Bart. (1834-1890) was best known for the head of Queen Victoria on coinage, and the statue of the Duke of Wellington at Hyde Park Corner. He was born in Vienna, but educated in England. In 1856 Boehm was presented with the Austrian Imperial Prize for Sculpture, the start of his distinguished career. He came to live in England in 1862, and was granted citizenship in 1865. He became a member of the ARA in 1878, and was elected to the Royal Academy in 1882. A speciality of his was the portrait bust, many examples of which are in the National Portrait Gallery. During his career he was commissioned frequently by the Royal Family and members of the aristocracy to sculpt for their parks and gardens. His most important works include 'St George and the Dragon' and his sculpture of Sir Francis Drake. Works by Boehm are at Balmoral and Dalmeny. His large equine statue at Dalmeny was commissioned by the Baron Mayer de Rothschild for his new mansion, Mentmore Towers, in the 1860s. His most famous pupil was the Princess Louise, Duchess of Argyll daughter of Queen Victoria. Gossip at the time hinted that the two were lovers, but this remains unproven. There are many statues by Boehm in London, where he died in 1890. In St Paul's Cathedral is his memorial statue to General Charles George Gordon. At Hyde Park Corner a large equestrian statue of the Duke of Wellington dominates the area. Other statues can be found in Fleet Street, the Temple Bar and Embankment Gardens.