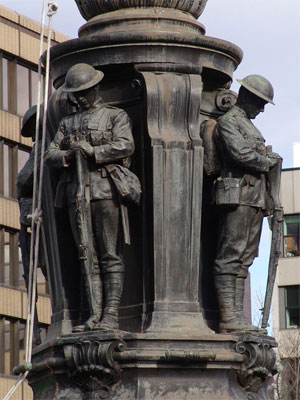 The Sheffield War Memorial is sited in Barker's Pool, outside the Sheffield City Hall. Barker's Pool was closed to traffic in 1989 and has recently undergone extensive redevelopment, which involved the full conservation of the war memorial.

The First World War memorial is dominated by an extremely tall flag pole, 25 metres high - actually a ship's mast, made in one length of mild steel in Hull. The foot of the flag pole is surrounded by a bronze base, 5.3 metres high. Standing around the base are the figures of four ordinary soldiers with their heads bowed.

The bronze base is also embellished by the emblems of local regiments and the Navy, Merchant Navy, Army and Air Force, and Sheffield's coat of arms.

The surface condition of the bronze prior to conservation was poor, due to lack of regular maintenance. Old layers of black wax had been worn away in some areas and was flaking in others. Much original patination remained but there were also large areas of stable, natural green patina, and localised active corrosion in recesses. 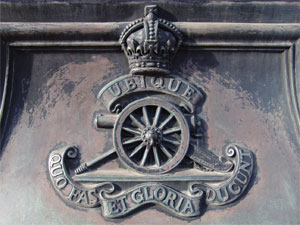 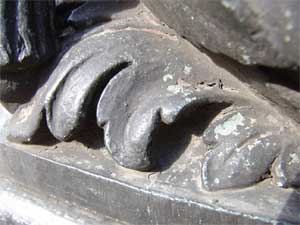 The flag pole is topped with a gilded ball and crown. For many years this had been occupied by crows, who's guano had accelerated the loss of gilding. The mechanism for raising flags had been damaged by vandals. All components were repaired or replaced as required. The white paint on the flag pole was cracked and missing altogether in some areas, allowing the mild steel beneath to rust. The presence of lead paint was identified, so all work to the pole was carried out according to the required Health & Safety procedures for the presence of lead paint. 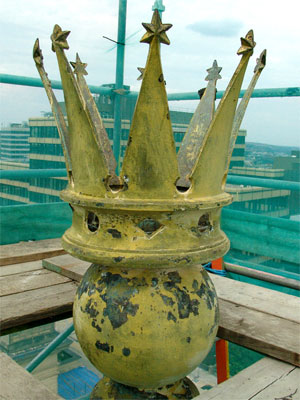 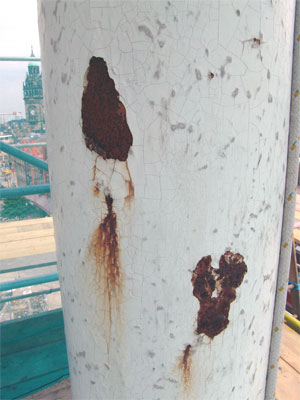 The corrosion was treated and the paint surface carefully rubbed down. The flag pole was then completely repainted. The damaged seal between the mast and the bronze base was removed and re-sealed. The ball and crown finial was repaired, primed, painted and regilded with English gold leaf. Bespoke stainless steel bird roosting deterrent spikes were fabricated and installed. For scheduling reasons, this could not be carried out from the scaffold but was done from a crane lift after the completion of the redevelopment of the square. 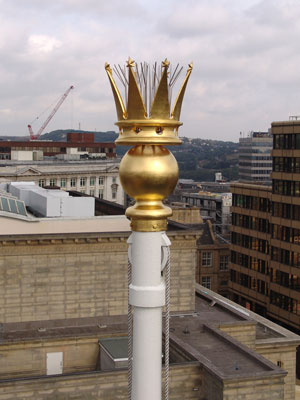 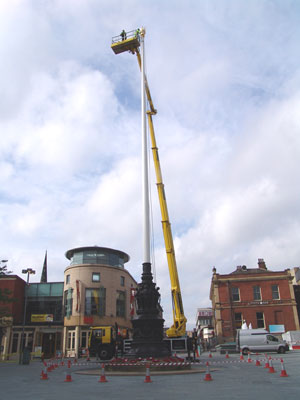 The bronze base and figures were steam cleaned to remove all old black wax. All localised corrosion was removed, and the patina carefully retouched to return the appearance to the original dark brown. Four coats of microcrystalline wax were then applied to a warm bronze surface. 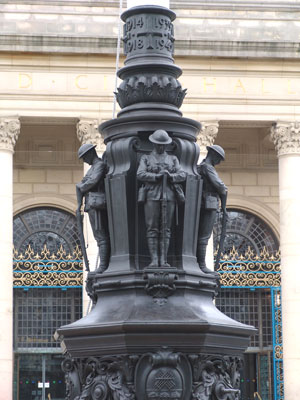 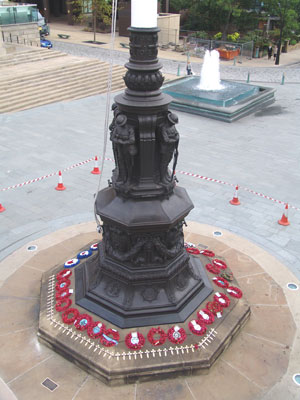 The stone plinth had been damaged by shrapnel during the Second World War. The shrapnel damage was retained, but the stone plinth repaired and cleaned. The steps around the cenotaph were removed as part of the refurbishment of the surrounding paving. The memorial is now permanently dressed with wreaths and crosses. 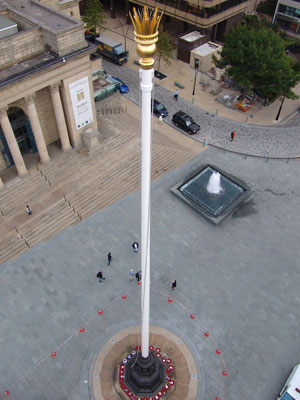 George Alexander lived and worked in London. He exhibited at the Royal Academy from 1905 to 1940. After the First World War, Alexander also collaborated with the architect Victor Wilkins on memorials for Herne Hill in South London (1921) and for the Portsea Island Gas Company (1922).