EQUESTRIAN STATUE OF THE DUKE OF WELLINGTON

Client: WS Atkins Ltd, on behalf of the Aldershot Garrison

This vast bronze originally stood on the Wellington Arch in London. It had always been considered to be too large in proportion to the arch, so when the arch was moved in 1883, the statue was removed. The army rescued the sculpture and re-sited it in Aldershot, near the Garrison Church, where it still stands. (For more details of the origins of this bronze, see the lower part of the page on 'The Quadriga'). The statue lay neglected, obscured by trees, until 2003 when we restored the bronze, and the Army re-landscaped the site. 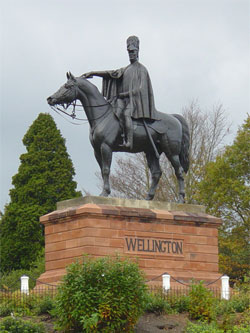 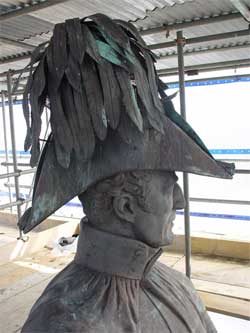 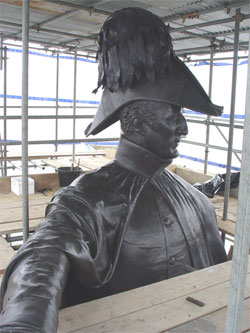 The bronze surface had suffered from lack of regular maintenance. Cleaning was confined to the minimum, using mainly high pressure steam, with selective hand removal of small areas of active corrosion. Retaining the existing natural patina was seen as important as it was basically stable and allowed for minimal intervention with the surface.

Structural repairs were made to the plumed hat, the horse's reins and areas associated with the joints in the casting where water had promoted the corrosion of ferrous fixings. 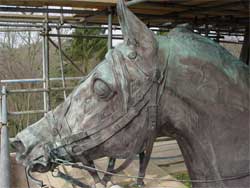 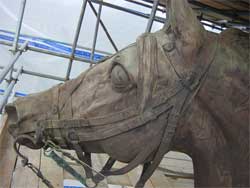 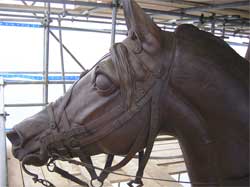 Finally the whole sculpture was treated with a very thin chemical conversion patina using traditional techniques to unify the colour, while leaving a variegated finish of dark greens and dark browns. Five thin coats of clear wax were then applied to protect the surface and provide a coating that should require simple maintenance every three to five years.

The horse represents 'Copenhagen', the charger who bore Wellington for all eighteen hours of the Battle of Waterloo, who died in 1836.  Copenhagen is buried in an honoured grave in the grounds of Stratford Saye.

The sculptor, Matthew Cotes Wyatt (1777-1862) was born into a famous architectural family and educated at Eton and the Royal Academy.  His father James Wyatt was one of the leading architects in England in the late 18th century.  At the Royal Academy in London Matthew Cotes Wyatt exhibited portraits and history paintings in the years 1803-1814.  From 1814 onwards he was mainly active as a sculptor. His good relations with the Royal Family brought him many important commissions, although Wyatt's grandiloquent monumental works sometimes gave rise to a great deal of controversy.  His best known works include the cenotaph to Princess Charlotte in St. George's Chapel, Windsor, the statue of George III in London, the group St. George and the Dragon, intended for Windsor Castle, now at Stratfield Saye, and this equestrian statue of the Duke of Wellington, which after a heated debate was removed here from Hyde Park Corner in London.  The most bizarre and remarkable piece in Matthew Cotes Wyatt's oeuvre is the polychrome marble sculpture of Lord Dudley's Newfoundland dog 'Bashaw', completed in 1834.