A replica by Louis Auguste Malempré (1886); the original designed by Francis Bird (1712)

Under contract to the City of London, we regularly maintain over 80 public sculptures, fountains and plaques.  We also conserved this memorial and made repairs, in 2001-2002.

The monument consists of a Portland stone landing and steps with inscribed marble pedestal surmounted by the figure of Queen Anne (1665-1714). The pedestal is surrounded by figures representing Britain, North America, France and Ireland.

Francis Bird (1667-1731) sculpted the original statue between 1711 and 1712 at the request of the Cathedral's architect, Sir Christopher Wren. By 1885 it had become very dilapidated and this copy was carved by R.C. Belt and L.A. Malempre to replace it. The original was stored and forgotten in the yard of the City's stonemason, from where it was rescued by Augustus Hare who transported it to his estate at Holmhurst near Hastings, where it remains*. The copy is considered greatly inferior to the original. 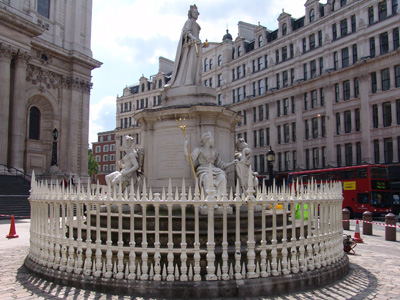 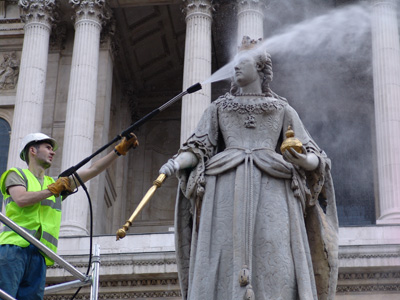