Under contract to the City of London, we regularly maintain over 80 public sculptures, fountains and plaques. We also undertook full conservation of this former drinking fountain in 2003. 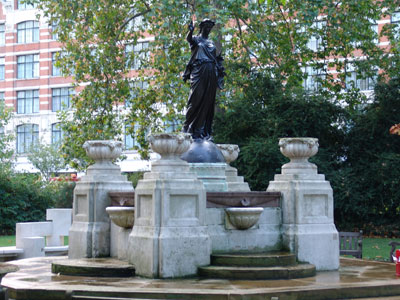 The Grade II Listed fountain stands on an octagonal four-stepped platform with the main structure consisting of a rectangular Portland stone base with corner piers capped by four urns with fluted bowls and lion masks and foliate decoration around the rims. Between the piers are set four large carved bowls of red marble with simple shell form spouts which are directed into four lower carved marble basins with simple moulding and petal decoration. In the centre and rising from the platform created by the granite bowls is a circular plinth decorated with thistle leaf and simple carved moulding, on top of which is a cast bronze life size figure of Peace, standing on a bronze hemisphere decorated with flowers.

The 11m-high fountain originally comprised a huge stone canopy in an eclectic style with four corner figures of Temperance, Hope, Faith and Charity. The structure fell into disrepair and was taken down. See the illustration below that appeared in 'The Builder' in 1871.

The sculptor John Birnie Philip (1824-1875) exhibited at the Royal Academy from 1858 almost through to his untimely death of bronchitis at the age of 48. He received a number of commissions for public sculpture, most importantly for the podium frieze on the Albert memorial, where he was responsible for the architects and sculptors, as well as allegorical statues of geometry, philosophy, geology, physiology, and angels on the spire. His style tends to the serious, with his female figures stern and solid rather than beautiful. But his compositions can be graceful, and a particularly elegant example of his work is this fountain girl. An example of his non-figurative architectural work is the decoration on the piers of Blackfriars Bridge.

There is an apocryphal story that this figure of Peace wears a gold wedding ring: we have investigated this and find that there is indeed a ring soldered to the figure’s ring finger, however it is made of bronze, and so casts into doubt a story that the Superintendent found a wedding band and had it soldered onto the statue, as he could not trace the owner. Because it is of bronze it is unlikely to have been a wedding ring but the ring actually is soldered on (it was not part of the original casting), so this still presents something of a mystery. You can view a full size version of this image here