Under contract to the City of London, we regularly maintain over 80 public sculptures, fountains and plaques.  We also conserved this statue in 2003 and have maintained it since. 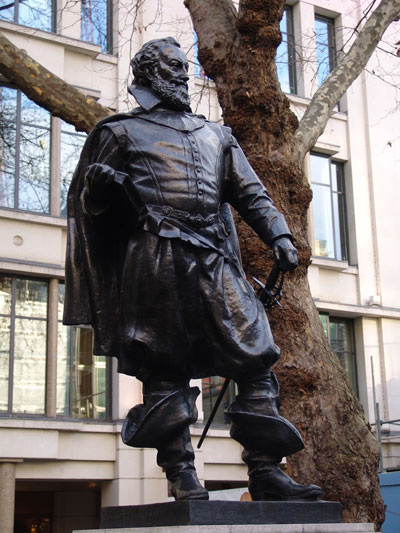 John Smith (c. January 1580 - June 21, 1631) was born in London and started life as a cobbler, but he became a soldier, explorer, and author, and Governor of Virginia and Admiral of New England. He is remembered for his role in establishing the first permanent English settlement in North America at Jamestown, Virginia, and for his brief association with the Virginia Indian girl Pocahontas during an altercation with the Powhatan Confederacy and her father, Chief Powhatan. The Captain is buried locally, in St Sepulchre Holborn.

The life-size bronze statue stands on a rectangular plinth faced in Portland stone. The plinth to the east side carries a carved and gilded inscription dedicating the monument and recognising HM the Queen Mother for unveiling it. Above the inscription is a small carved relief of the City of London's crest with details picked out in red. The inscription reads, 'First among the leaders of the settlement at Jamestown Virginia which began the overseas expansion of the English-speaking peoples'.

Sculpted by Charles Renwick, this is thought to be a loose copy of an original by William Couper that dates from 1907. It was cast in New York by Roman Bronze Works Inc.  The London replica was presented to the City in 1959 to commemorate the 350th anniversary of Smith’s return to London from Virginia in 1609-10.

William Couper (1853-1942) was a native of Virginia and practised as a sculptor in New York. He was introduced to the medium through his father’s marble works, and studied European sculpture on a series of trips over a span of around twenty years. A noted sculptor of his period in America, Couper’s works included many public sculptures of military heroes and historical figures. His sculptures can be seen in numerous public places, institutions, and museums both nationally and internationally.