THE PALACE OF QUELUZ - AENEAS AND ANCHISES 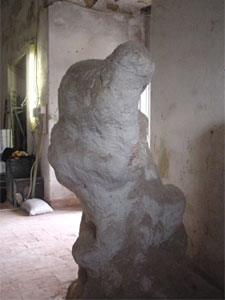 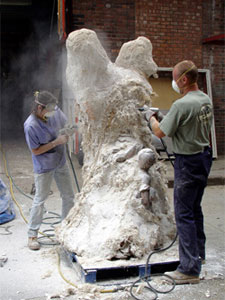 Two of the sculptures held in store at the Palace of Queluz had at some time in the past been completely covered in plaster and supporting wooden battens. We transported these two sculptures to our studios in London where removal of the plaster revealed them to be life size groups depicting the Rape of the Sabines, and Aeneas and Anchises, (shown below). 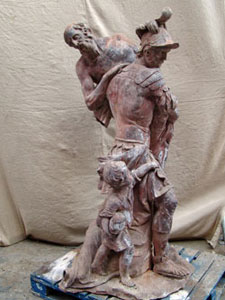 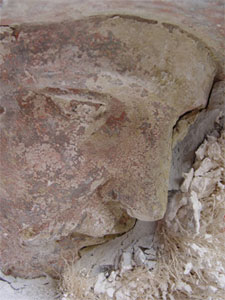 The remains of early paint schemes were found on the sculpture's surface. Samples were taken for analysis, which revealed that the sculpture had received at least six paint treatments up until the early 20th century. These schemes were all of light grey/stone colours. The red colour so visible now on one of the sculptures is the remains of a coat of red iron oxide primer, applied prior to a 19th century application of stone-coloured paint. 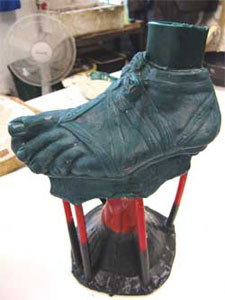 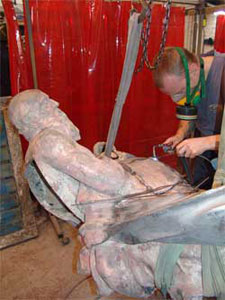 Several parts of the sculpture were found to be missing, or damaged beyond repair. Moulds were taken from another model of the sculpture at Wrest Park, with the owner's kind permission, and the missing pieces were cast in lead and attached to the sculpture. Damaged areas were then repaired by lead burning and a new stainless steel armature inserted to support the sculpture and the base area. 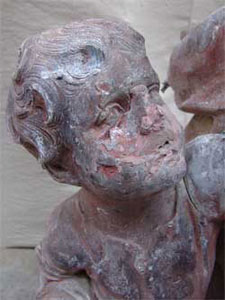 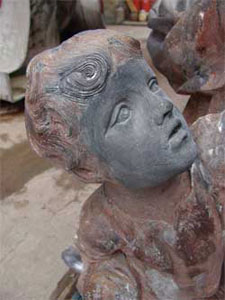 After fine finishing the surface, the repaired areas were then temporarily retouched with paint to match the remaining red coloured primer on the surface. A new piece of stone was carved to support the lead base area of the sculpture. Both sculpture groups were then transported to the Victoria and Albert Museum and installed in the Sculpture Galleries for temporary exhibition, before returning to the studio for the final stages of the conservation.  Photo below right, courtesy Richard Holttum 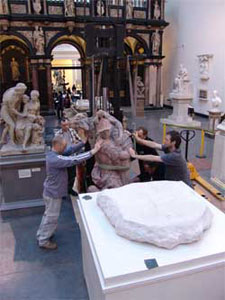 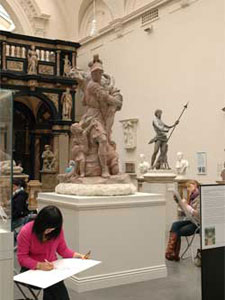 Both the Rape of the Sabines, and Aeneas and Anchises were returned to the Palace of Queluz and placed in temporary storage. 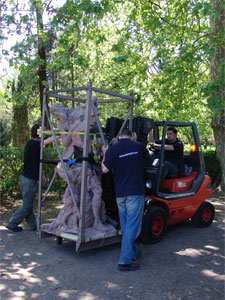 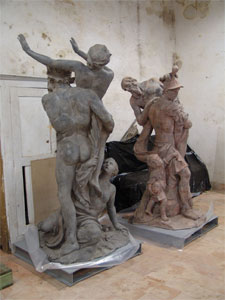 Before re-siting in the Palace grounds, discussions took place with the Palace of Queluz and the World Monuments Fund, Portugal and decisions were made regarding the surface treatment that the sculpture should receive to try to protect it from the disfigurement of lead tetroxide formation. The sculpture was then surface treated with a lead patination oil and areas where repairs had been carried out were selectively painted to match the original surface colour, using matt casein based paints. A new concrete plinth was constructed for the sculpture near the 'canal' in the Palace gardens. The sculpture group on its limestone base stone was securely fixed to the plinth and the joint between the base stone and the plinth capping stone was then sealed with lime mortar. 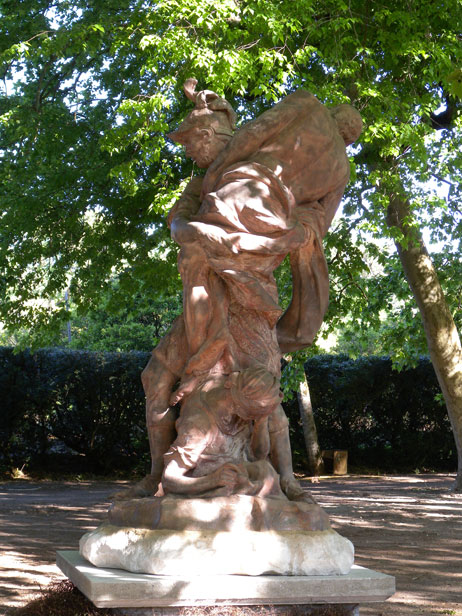 This sculpture is thought to be based on the marble by Pierre le Pautre (1659-1744), now in the garden of the Tuileries but originally sited at Marly.  A terracotta model for Le Pautre's marble is held in the V&A .

Aeneas was the son of Anchises and Venus. He was a cousin of King Priam of Troy, and was the leader of Troy's Dardanian allies during the Trojan War. After the fall of Troy, he led a band of Trojan refugees to Italy and became the founder of Roman culture (although not of the city of Rome itself). He was the mythical progenitor of the Julian genes through his son Ascanius, or "Iulus," and Virgil made him the hero of his epic, the Aeneid.

In the Trojan War, Aeneas was one of the most respected of the Trojan heroes, perhaps second only to Hector. He engaged in abortive single combat with the Greek heroes Diomedes, Idomeneus, and Achilles; twice he was rescued through the intervention of gods. When Troy was sacked by the Greeks, Aeneas fought on until he was ordered by the gods to flee. He finally left the city, carrying his father and the household gods on his shoulders; his wife Creusa was lost in the confusion, but his son Ascanius escaped with him. (This sculpture group depicts this episode).

Aeneas and the Trojan remnant then wandered across the Mediterranean, hounded by the enmity of Juno. In one of the most famous episodes of the Aeneid, they were cast ashore near the North African city of Carthage, where they were hospitably received by Dido, the city's founder and queen. There ensued a love affair between Dido and Aeneas, which threatened to distract Aeneas from his destiny in Italy. Mercury was sent to order Aeneas to depart and Aeneas, forced to choose between love and duty, reluctantly sailed away. Dido, mad with grief, committed suicide. When Aeneas later encountered her shade on a trip to the underworld, she turned away from him, still refusing to forgive his desertion of her.

In Italy, Aeneas allied himself with King Latinus, and was betrothed to Latinus' daughter, Lavinia. Lavinia's former suitor, Turnus, goaded by jealousy and the machinations of Juno, declared war against the intruder, and a period of bloody fighting (the Italian wars) followed. Aeneas was victorious, eventually killing Turnus in single combat, and went on to found the city of Lavinium. At the end of his life, Aeneas was deified at the request of his mother, Venus, and became the god Indiges.