In the summer of 1999 a huge plaster sculpture was discovered hidden in undergrowth in the woods on Haldon Hill in Devon by a member of the public. The National Trust identified the sculpture as the original plaster model for the bronze statue of Sir Francis Drake at Tavistock (there is also a cast in Plymouth). We were commissioned by the National Trust to conserve the model at Buckland Abbey, where it would subsequently be displayed. 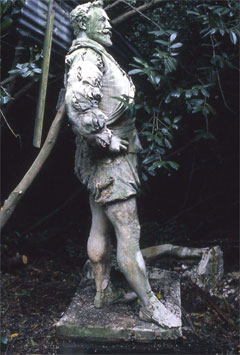 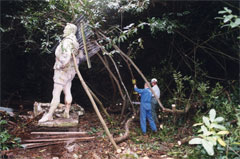 Given the poor conditions in which the sculpture had stood for many years, it was surprisingly intact. Some pieces had become detached entirely from the figure, and there were many deep fissures and cracks in the plaster. 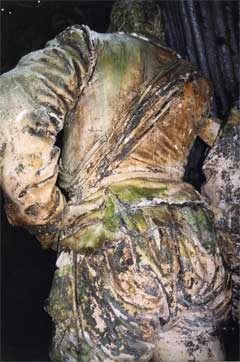 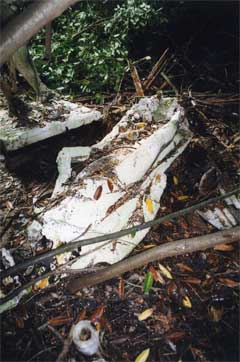 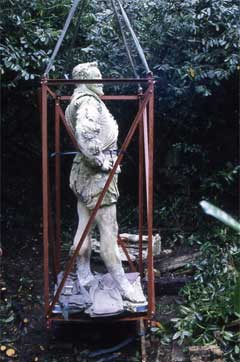 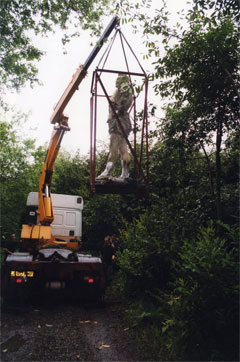 The undergrowth was cut back from around the sculpture before packing it carefully in a steel frame, and lifting the frame by crane onto the back of a lorry for transportation to the Abbey. The surrounding area was thoroughly searched for any original fragments, which would be used in the repair of the model. The model was enormously heavy and so it was decided to carry out the restoration on site at the Abbey, as the intended display area was at the top of a flight of stairs. 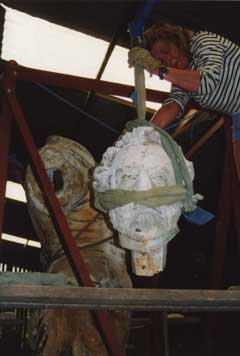 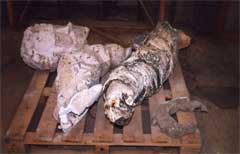 The model was first placed into a ground floor studio, where all loose parts were carefully detached and separated from the main body. This was done to allow new armatures to be placed inside the parts in order to attach them securely to the sculpture during repairs, and secondly to reduce the weight so that the pieces could be moved up the staircase to the eventual display room.

The sculpture was in three main parts: solid legs to the waist, (which contained the supporting iron armature), hollow torso and hollow head. There were also the base pieces and hollow arms. A new steel base was prepared and new stainless steel leg armatures were bolted to the base so that the reconstruction could begin. 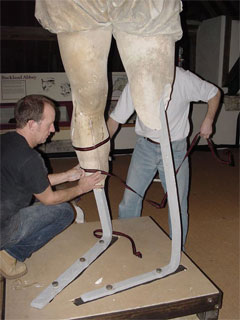 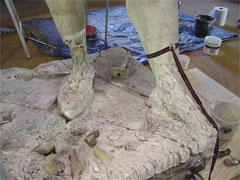 The legs were bolted onto the prepared base frame, through holes in the original supporting iron armature bars. The left arm was attached to the torso and the whole thing lifted and lowered onto the waist.

The head was then lifted up and placed in the neck cavity. The right arm was fitted and held under tension while being pegged and re-plastered into the correct position. 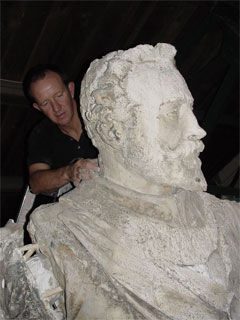 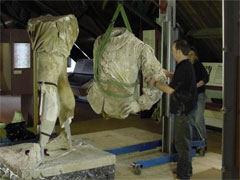 Finally the base was slotted together and all the loose and removed pieces reattached from where they came. After being allowed to dry, the newly applied plaster was lightly sanded and the repairs selectively coloured to match the original.

Sir Joseph Edgar Boehm, Bart. (1834-1890) was best known for the head of Queen Victoria on coinage, and the statue of the Duke of Wellington at Hyde Park Corner. He was born in Vienna, but educated in England. In 1856 Boehm was presented with the Austrian Imperial Prize for Sculpture, the start of his distinguished career. He came to live in England in 1862, and was granted citizenship in 1865. He became a member of the ARA in 1878, and was elected to the Royal Academy in 1882. A speciality of his was the portrait bust many examples of which are in the National Portrait Gallery. During his career he was commissioned frequently by the Royal Family and members of the aristocracy to sculpt for their parks and gardens. His most important works include 'St George and the Dragon' and this sculpture of Sir Francis Drake. Works by Boehm are at Balmoral and Dalmeny. His large equine statue at Dalmeny was commissioned by the Baron Mayer de Rothschild for his new mansion, Mentmore Towers, in the 1860s. His most famous pupil was the Princess Louise, Duchess of Argyll daughter of Queen Victoria. Gossip at the time hinted that the two were lovers, but this remains unproven. There are many statues by Boehm in London, where he died in 1890. In St Paul's Cathedral is his memorial statue to General Charles George Gordon. At Hyde Park Corner a large equestrian statue of the Duke of Wellington dominates the area. Other statues can be found in Fleet Street, the Temple Bar and Embankment Gardens.