Cotehele, near Plymouth, was built 1485-1627 and is one of the least-altered medieval houses in the country. The display of firearms in such an environment presents particular problems that would not be encountered in a museum. 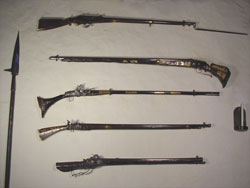 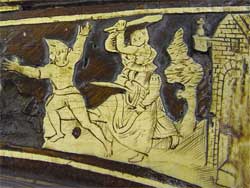 We conserved twenty weapons from the collection, including matchlock guns, pistols, revolvers and a cross bow. Many of the guns were decorated on the stock and barrel with complex inlay and engraving. 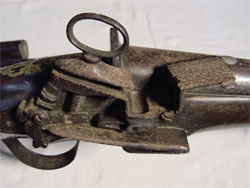 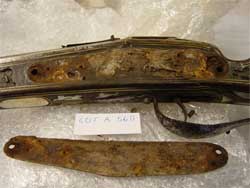 The locks were, in the main, very dirty, and the external surfaces were heavily rust spotted (see above left). This matchlock gun (above right), with a sighted octagonal iron barrel, has a walnut stock inlaid with engraved mother of pearl animals and birds. A coverplate had been attached to the butt at some point in the object's history, to brace a weak point. 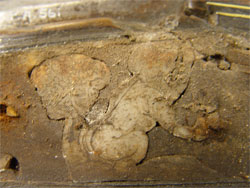 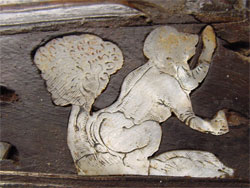 Removal of this 'repair' cover plate revealed intact inlay. The area was very dirty, and was cleaned using hogs hair brushes, followed by moist swabs. This revealed the full detail of the mother of pearl inlay, which was in much better condition than the inlay on the barrel, which through having been unprotected over the centuries had lost much of the engraving and many pieces of inlay. Any loose inlay was re-glued using fish glue, as would have been used in the original manufacture. 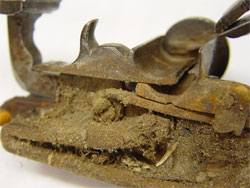 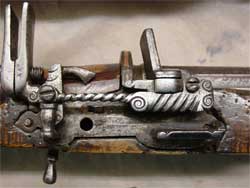 The mechanisms were removed from the guns and dismantled as far as possible, in order to clean the large amounts of dirt, dust and rust which had accumulated over the years. Loose dirt was removed using a hogs hair brush and vacuum. Loose rust was removed using '0000' wire wool swabs, and wooden or metal picks to clean the rust from corners. In extreme cases of heavy corrosion, scalpels were used. Following cleaning, iron parts of the firearms were waxed, brass and nickel parts and large areas of steel with gold or silver inlay were lacquered as this helps to consolidate the edges and prevent them from lifting. These surface coatings were necessary to protect from further rusting, given the problematic environment of their display. The gun mechanisms were then reassembled and reattached. Bespoke security brackets were made for each weapon, designed to hold the firearm away from the wall, to allow air flow and minimise the effects of moisture in the walls. The brackets were covered with a protective inert plastic coating to prevent contact between the object and the bracket.