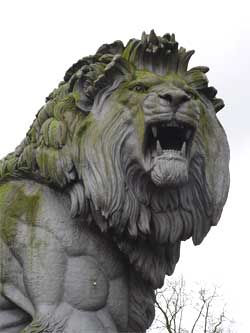 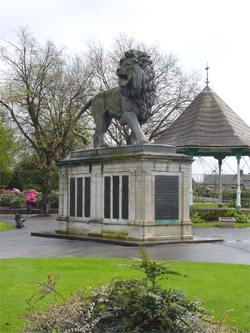 The Maiwand Lion is a war memorial to those who fell in the Afghan Campaigns, and stands in Forbury Gardens in Reading. The cast-iron sculpture was cast by Messrs. Young and Co. of Pimlico in 1866. Prior to conservation, the protective paint layer on the cast-iron lion was beginning to fail and the large stone plinth required cleaning. 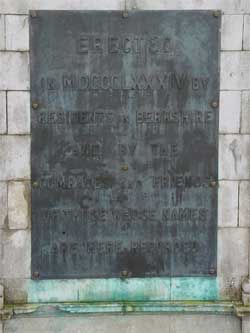 The bronze memorial plaques had not been maintained for several years. This had resulted in green copper sulphates staining the Portland stone plinth. This type of staining is almost impossible to remove, though the appearance can be improved (see photo below, after conservation). Poulticing the stain is an option, however this carries the risk of drawing further staining out of the stone.

Micro-abrasive cleaning is not recommended on soft, porous stones such as Portland, as even the most gentle abrasive damages the stone.

Such copper staining can be avoided by regular maintenance of bronze sculptures and plaques.

The plaques also had several fixings missing and had been vandalised as a result, causing some of them to be bent and distorted. 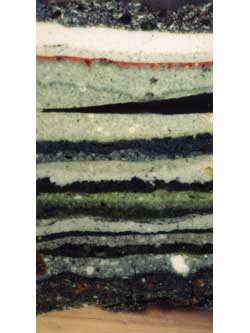 Paint scrapes were taken from areas of the sculpture likely to have retained all the layers of paint throughout the history of the monument.

Analysis revealed the original colour of the lion to be a dark 'bronze' green. There were two applications of this colour, followed by a bright municipal green, then three more coats of the original bronze green.

The colour of the lion then changed to grey, well before World War II, and remained so until this year. The most recent applications were of grey aluminium paint. 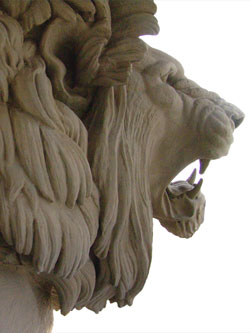 The fixings of the lion were examined and found to be sound.

The bronze plaques were removed to the studio where they were straightened, cleaned, selectively repatinated and re-waxed. Missing plaque fixings were cast and engineered to match the originals, and missing letters cut and re-fixed.

The plinth was cleaned using the DOFF steam cleaning system, and extensive repairs made to the stone cladding, including the removal of the top layer and re-pinning to the central brick core of the plinth.

The failing paint surfaces on the lion were carefully removed, and repainting began with one coat of zinc phosphate primer. 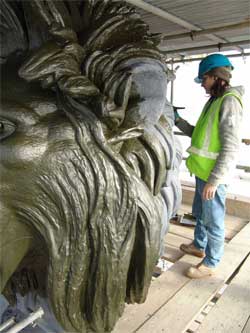 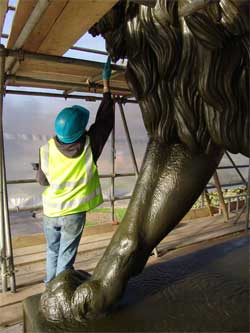 The lion then received two midcoats of micaceous iron oxide, and then two top coats of exterior grade metal paint were applied in a colour to match the original colour. Finally the conserved bronze plaques were returned to site and securely re-fixed. 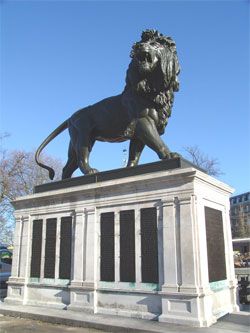 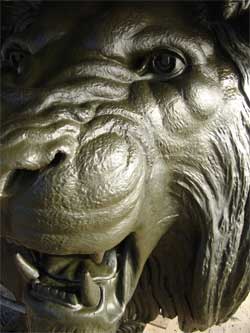 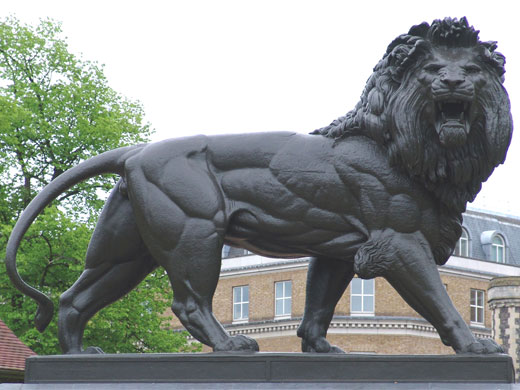 George Blackall Simonds (1843-1929) was the fourth child of George Simonds Senior of Reading in Berkshire, director of the H & G Simonds Brewery in the same town. In 1858, aged just 15, he went to study sculpture under Professor Johannes Schilling in Dresden, moving on to study under Louis Jehotte at The Academy of Brussels, before living and working for 12 years in Rome from 1864. He returned to London in 1875 and set up his studio. The Maiwand Lion was commissioned by the Berkshire Memorial Fund with the Berkshire Regiment as a Memorial to the 66th Regiment, who had been almost wiped out in the Battle of Maiwand in the Afghan War of 1880.

In 1887, Simonds sculpted a monumental marble statue of Queen Victoria for her Golden Jubilee, which stands outside Reading Town Hall. His masterpiece 'The Falconer' has been made famous by the version which stands in Central Park in the city of New York. Simonds created over 200 works in an extraordinary diversity of media and techniques, mastering; marble, bronze, plaster, terracotta, cameo, silver, brass, wood and cast iron - a remarkable achievement.