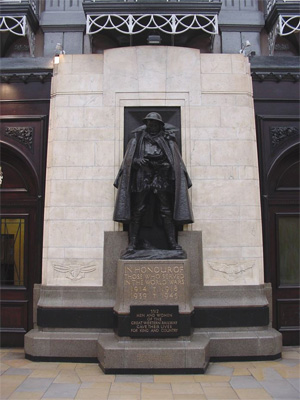 Prior to conservation in 2001, the bronze sculpture and backing niche were structurally sound, however the surface of the bronze was in poor condition.

The stonework was in better condition with mainly surface dirt discolouration. The white marble had some staining to the surface and some loss or damage to mortar joints, particularly on the upper sections of the surround. The carved lettering was once leaf gilded but had since been only painted with gold paint. The inscription in the base stone was very hard to read.

The bronze sculpture had an underlying, naturally formed, green/black patination caused by the corrosion of the original patina over many years as a result of the corrosive environment within the station.

Over this had been applied many coats of boiled linseed oil (see photo below left), with black pigment in some layers. These coatings had been used in the past in an attempt to maintain the bronze. 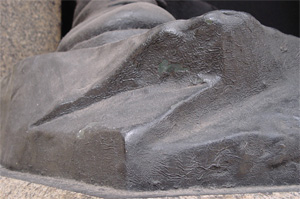 However, by 2001 the oil coating had blistered and crinkled giving a very unsightly and sticky surface to the sculpture with over-layers of surface carbon deposits from the diesel fumes and general airborne dirt.

We began with test cleans and it was established that the best way to do the initial cleaning was to gently peel off the bulk of the surface coating by hand. In areas where the coating proved to be more firmly bonded, we used either propane gas torches or sodium hydroxide based paint removers to soften the surface coating before removal by hand. 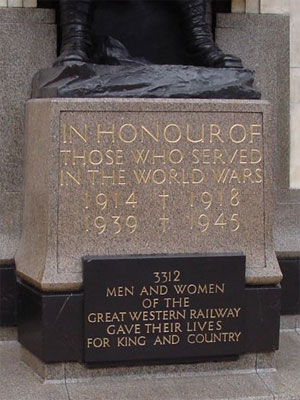 This was followed by further hand cleaning and neutralisation of any remaining deposits of the chemical cleaning agents. The bronze was then high-pressure steam cleaned. The bronze surface was then chemically patinated and given three coats of microcrystalline clear wax applied to the bronze after warming to ensure adequate absorption of the wax into the surface.

The wax coatings were each hand buffed. Small areas of porosity and casting flaws in the bronze were filled using coloured hard waxes to prevent water traps.

The marble was swept clean to remove all dry, loose deposits of dirt. Non-acidic marble cleaner was applied to all the stonework. This was then removed by washing down with water. The surface was then allowed to dry.

The larger, more noticeable paint drips/splatters were removed from the surface of the marble using sodium hydroxide based paint remover.

All stone surfaces were then buffed to a softly-polished surface. Small areas of missing mortar were filled as necessary. The carved lettering at the base of the sculpture that was originally leaf gilded was repainted with gold paint, as instructed by the client. The areas of black/dark grey stone at the base of the sculpture were waxed with a colour-tinted wax to improve their appearance, and then hand buffed to a soft polished finish.

While his career was short (it spanned just 16 years), Charles Sargeant Jagger (1885-1934) established himself as one of the leading war memorial sculptors in the years following 1918, and his contribution to the history of British sculpture should not be underestimated.  After leaving the Royal College of Art in 1911, Jagger had little time before the outbreak of war to develop a personal style. However, on his return to Britain in 1918 the sculptor wasted little time in establishing his artistic identity: his sculptures of soldiers forming the foundation for his reputation.