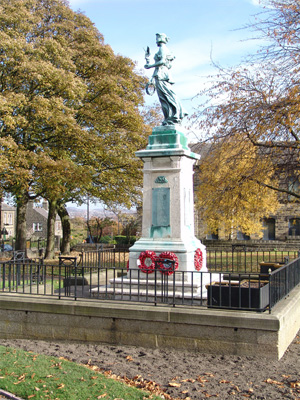 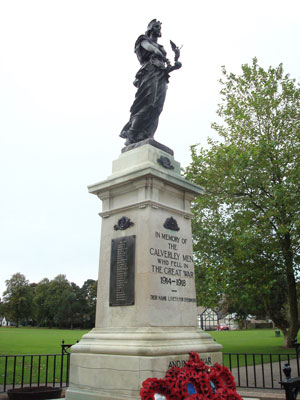 This Grade II Listed war memorial to both the first and second world wars when first inspected was structurally sound overall, however the surfaces of the bronze, stone and iron elements had suffered from degradation, in the main resulting from lack of regular maintenance. The bronze elements had lost all original patination and displayed the green/black, variegated surface typical of a natural patina formed in an industrial environment. 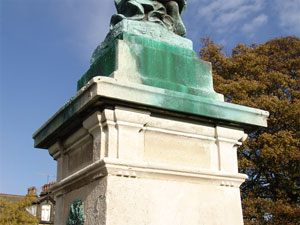 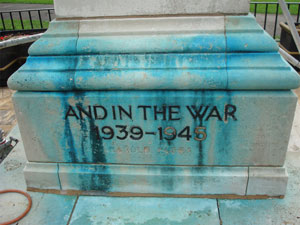 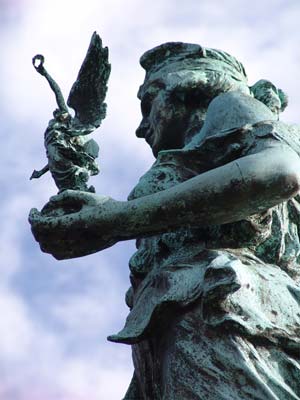 The limestone plinth showed signs of light weathering and was heavily discoloured with copper salts, along with light sulphation typically under the mouldings. There was some loss and failure of mortar joints and previously repaired areas, predominantly on the steps.

The bronze and stone work were cleaned with high-pressure steam (DOFF). After DOFF cleaning, the bronze work was inspected to ensure no active corrosion pitting or other damage was present but no significant areas of active corrosion were found. A missing bronze rose-headed screw cap from the bottom left of the 1939-45 roll of honour plaque was copied in bronze and replaced. 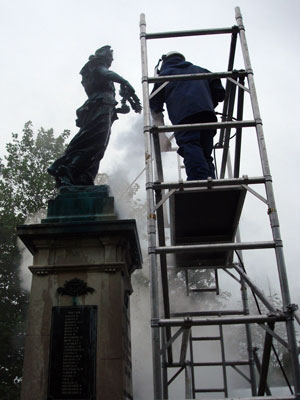 The staff of the small figure in the hand of the Patriotism statue was inspected at close quarters. It was decided that this short staff appeared to be that which was originally intended so no repairs or replacements were carried out.

The existing green and black/brown naturally formed patina on the statue and bronze insignia and plaques (illustrated at the foot of the page) was over-patinated using traditional materials and methods.

Following the patination, the bronze elements were warmed then coated with clear microcrystalline wax. Three coats of wax were applied. Once cool, the surface was hand buffed with soft bristle brushes and lint-free cloths. Tinted hard wax was used to fill the holes and porosity in the casting to prevent water entering the bronze.

After DOFF cleaning, the heavy copper staining was inspected and it was decided that poulticing would only worsen the appearance of the staining, therefore the stained stone was treated with a thin shelter coat of lime wash to improve the stone’s appearance. This will need to be re-applied during maintenance treatments. Unfortunately there is no alternative treatment once the copper staining has reached this extent. 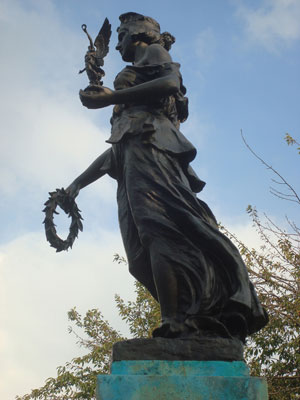 The large lettering forming the dedications on the front of the plinth was repainted black.

All loose lime mortar and previously repaired areas now failing were raked out and the exposed joints cleaned of loose material. Lime mortar repairs were made to joints and areas of damage. A standard soft hydraulic lime mortar was used, colour matched to the existing sound mortar. 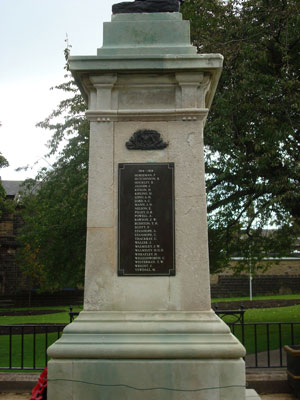 The railings were in reasonable condition but required the replacement of missing finials on the pilasters. The paint surface was in need of maintenance. We copied and replaced 15 missing small cast-iron finials, attached by threading them into the railing crest as originally fitted and cross-pinned to prevent easy removal. Any exposed iron on the railings was wire brushed to remove any loose rust; the existing paintwork was well rubbed down removing any damaged paintwork and to prove a surface key for repainting. Exposed iron was spot treated with two coats of Red Oxide Primer followed by a full topcoat painting, using Professional Black Gloss (external quality). 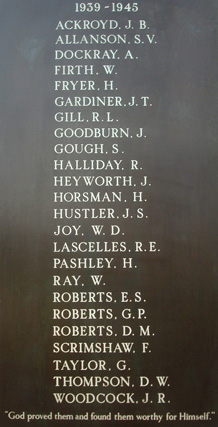