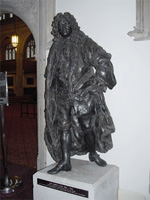 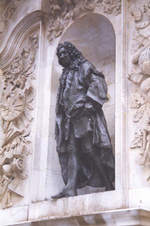 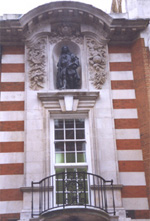 The original lead sculpture is a magnificent, life size figure by one of the eighteenth century’s foremost sculptors working in Britain, and it was vulnerable to potential damage in its site at the Sir John Cass Primary School in the City of London. As an interior lead it bore an unusual dark, even patina.

We began by cleaning and conserving the surface of the original sculpture, to put it into good condition. Next a fibreglass-cased silicon mould was made of the figure, and then this used to cast a fibreglass resin replica. The top layer of the resin was impregnated with lead powders, a technique which gives a remarkable resemblance to cast lead, and the surface finished with patination techniques.

A stainless steel armature and security fixing was inserted during the making of the replica, to give it strength and durability and protect it from potential theft.

Several replicas were made in this way, and sited at the various Sir John Cass schools and colleges in the City and East End of London. One replica was security fixed into the empty niche on the façade of the Institute’s central offices in the City, and the original lead was placed on display in the Guildhall.