MODEL OF A NUDE SEATED WOMAN 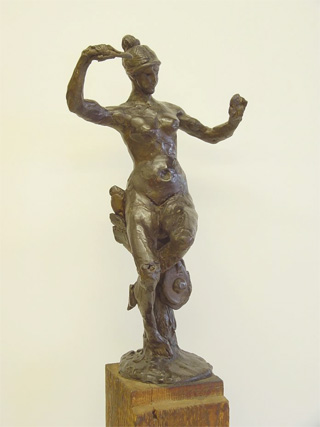 This wax model or maquette, height 36cms, probably representing Minerva, dates from after Dalou's return to Paris from London in 1879. On its original timber base, the piece is a working studio model, and was therefore never made to last the test of time.

Such maquettes, often also made from plaster or clay, are vulnerable to damage but are important because they illuminate the sculptor's working method, techniques and thought processes.

This model required cleaning and a few minor repairs to superficial cracks in the surface of the wax.

Dalou first exhibited at the Paris Salon in 1867, but when implicated in The Commune in Paris, he took refuge in England in 1871, where he rapidly made a name through his appointment as a tutor of modelling at South Kensington. There he laid the foundation of the development of the modern British school of sculpture, and at the same time executed a remarkable series of terra-cotta statuettes and groups, such as A French Peasant Woman, of which this sculpture is a bronze version. He returned to Paris in 1880.