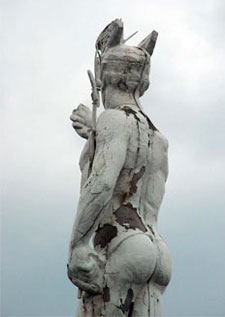 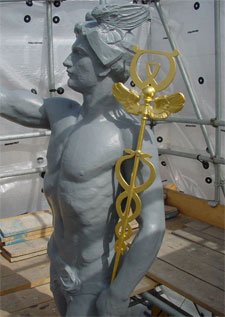 The hand-carved, elm sculpture stands on the roof finial of Willing House. Its paint was in very poor condition, heavily flaked and crazed. The underlying laminated timber joints had opened up as a result of water penetration and general aging. Mercury’s staff (caduceus) was fabricated from cast and sheet bronze. Paint analysis revealed the sculpture to have been painted a pale grey and that the caduceus was originally leaf gilded. The figure was craned off the roof and transported to the studio, where test drill samples revealed extensive wet rot damage to the core of the statue had made it structurally unsound. All the paint was removed from the surface and a large section of the timber was cut to allow access to the rotten core. All damaged wood was removed, and a thin-walled stainless steel tube inserted through the sculpture. This incorporated all the necessary roof fixings built onto the tube’s base and was set inside the sculpture using a polyester resin. The timber was treated to prevent further rot and consolidated as necessary, dowelling and pinning all splits and fissures. 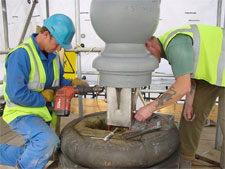 New wood was inserted where the timber had rotted to the surface, carved back to match the original surface detail. The figure was then primed and painted with a high quality exterior paint system, and the caduceus repaired, painted and leaf gilded to return it to its original finish. The figure was then lifted onto the roof and securely fixed in place.