Osborne House has a large collection of over life-size zinc sculptures made in the mid-nineteenth century. These sculptures were intended to look like bronzes and so were copper plated after fabrication, described in the manufacturer’s catalogue as ‘Galvano-plated cast zinc’. The copper is likely to have been toned with a chemical such as ferric nitrate and then coated with a tinted varnish to a rich brown colour, to simulate the applied patina on a true bronze of the period. This finish was not robust, as records show that the bronzing had to be done again only a few years after being delivered.

The zinc sculpture (examples shown above, before conservation) had lost all the original surface coatings and plating by the late twentieth century. The dull, grey surface had suffered heavy corrosion, resulting in the metal surface being covered with deep pitting (shown below, left), and in more sheltered areas the pits were covered with pustules of corrosion. The original finishing method was the cause of these severe corrosion problems: corrosion attack between dissimilar metals will occur with the presence of moisture and oxygen, and is referred to as electro chemical corrosion. In the case of copper plated zinc sculptures, once the protection of a varnish coating has been removed by time and lack of maintenance, corrosion will start. Small electrically charged cells are established, the copper being the cathode and the zinc the anode, and with moisture as the electrolyte, corrosion rapidly proceeds, with the zinc being preferentially corroded. This is further speeded by the presence of salt in the moist air. 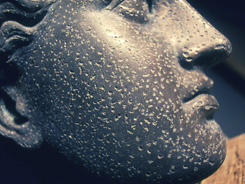 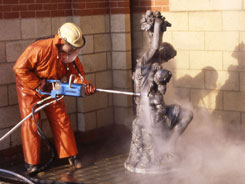 To prevent further loss of the surface, it is necessary to remove the corrosion products and inhibit further corrosion by effectively sealing the metal from water and salt laden air. Using high pressure water technology to blast the surface, good results can be achieved and this, with pacification of any remaining corrosion enables a stable state to be obtained and the restoration of the surface can start.

Repairs to cracks and weak joints were lead soldered in the original manner after cleaning. Several of the bases were cracked and required extensive structural repair and strengthening with stainless steel armatures. All the deep pits were hand filled with inert acrylic putty to restore the surface and reduce the area available to future attack. Given the need to seal the surface from moisture, it was necessary to apply an impermeable system of coatings. A coloured finish was then applied to the sculptures to simulate bronze as originally intended. The sculptures were then waxed with clear and coloured waxes to promote the intended ‘bronze’ finish, and can hereafter be maintained in the same way as bronzes, by yearly washing and waxing.