The over life-size statue of Mercury from the roof of South Shields Town Hall, is an externally electroformed statue over a traditional wax/plaster core material. The statue contained the original wrought iron armature bars and core material. The thickness of the electroformed copper varied across the surface of the statue from 4mm to 1mm. This variation had resulted in a crack, extending from the fig leaf, around the crotch to the base of the back.

Other weak areas were the back of the neck, under each armpit and on the ‘wind’ beneath the supporting foot of Mercury. 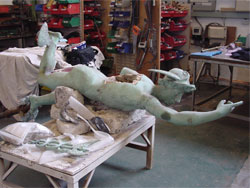 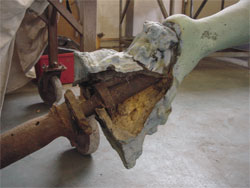 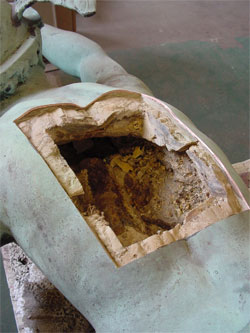 The ‘wind’ was considered to be beyond structural repair and it was agreed it should be reconfigured and used as a pattern to be cast into bronze. This would increase the structural contact point at the most vulnerable area and gave a registration of the statue’s standing attitude.

The core material (shown left) and armature were carefully removed from the statue. This involved cutting access holes in all the limbs and carefully chipping this wax/plaster material away by hand.

This process revealed butt solder joints in both arms, and these were released using heat to allow the removal of core and armature from the arms.

Once all the core and armature had been removed, the crack around the crotch was repaired using 3mm copper plate patches, soldered from the inside. This technique was also used to reinforce the thin areas beneath each armpit. The cracks were then flooded out with solder and fettled to follow the surface form. Once the cracks in the electroform were consolidated, the manufacture of the armature was commenced. Stainless steel bars were fitted into the limbs. These limb armatures were fixed using supporting rings, held in four planes by square bar stubs welded onto the main bar. The main support bar was manufactured in Grade 316 stainless steel to be an exact copy of the original iron bar, with respect to its bending continuously into the new bearing mount. 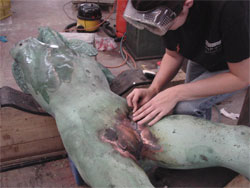 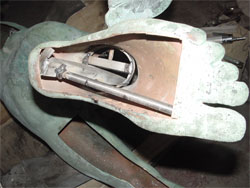 The main support bar was secured in place by welding to previously installed bars that had been fitted into the limbs. Inside the body of the figure, the main structural bar was immobilised by a stainless steel support across the shoulders and an attached wishbone across the crotch area. The waist was also supported in all planes by plates, held on square bar back to the main supporting bar. At this stage all the copper panels were reinstated using silver solder and fettled to regain the form. All other minor cracks and splits were cosmetically solder repaired using tin silver solder. The caduceus (Mercury's staff) was found to be structurally sound, electroformed over a brass, thick-walled tube and cross-pinned into the wings and snakes. 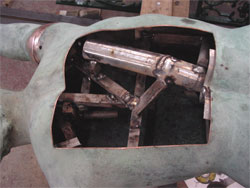 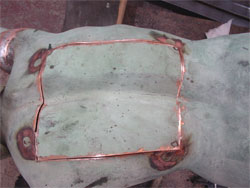 Superficial thinned areas in rebated areas were solder repaired and fettled to complete the form. The new bronze replacement ‘wind’ was braced in place using 316 stainless steel bars, pinned and welded to the main support bar. This was then attached to the sole of the figure’s foot, using solder. The bearing cover beneath the ‘wind’ was clad in copper for aesthetic reasons. 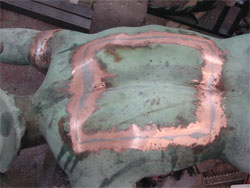 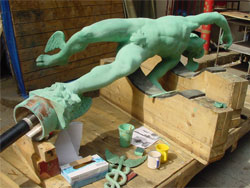 Once the repairs and patches were all completed and fettled to reinstate the smooth transition of the form, the surface was degreased using Acetone, then patinated using Ammonium Chloride in solution to reinstate the green patina on the worked areas. While this patina extended across lead solder joints, it was necessary in some areas to retouch the more obvious old joints (wings etc) with a casein-based paint. This was then fixed with a corrosion-inhibiting lacquer. The whole sculpture was then waxed with four coats of clear microcrystalline wax. To unify the cosmetic appearance of the sculpture, in some areas a tinted wax was used in the final coat and minor imperfections were filled with hard wax. The sculpture was then open crated and returned to South Shields, ready for reinstallation. 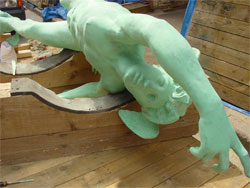 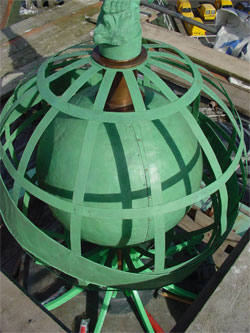 The distorted lattice globe and interior globe upon which the figure stands were reconfigured to their correct spherical shape and their cracked solder joints were repaired. The surface was then treated using the same system as the main statue, to maintain colour continuity. The cast-iron brackets which support the globes were primed and painted. The globes and Mercury figure were installed on the Town Hall roof on Sunday 22nd September 2002 by R. Beale and Co (Rupert Harris in attendance). 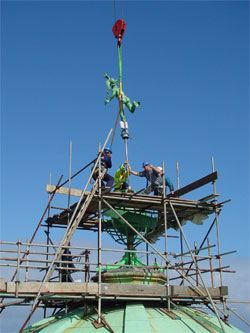 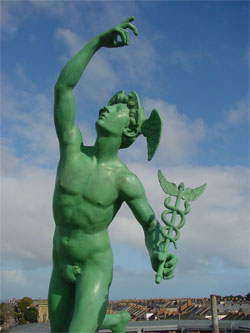