ADVICE ON THE HEREFORD SCREEN 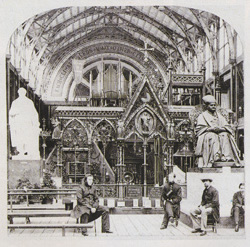 The Hereford Screen was designed by Sir George Gilbert Scott and made by the Coventry-based Skidmore Art Manufacturers Company of Francis Skidmore, and was installed in Hereford Cathedral (below left) after display at the International Exhibition in London in 1862 (left).

The most ambitious large-scale piece of 19th-century metalwork in Britain, it was described by Pevsner as ‘a High Victorian monument of the first order’.

Above: The screen at the International Exhibition, 1862 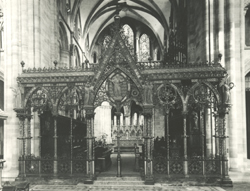 The screen is 36 feet long, 34 feet high and weighs around 16,000 lbs. The framework is cast iron with burnished brass columns. Copper was used for the capitals and foliage designs; the figures of Christ and angels are of electroformed copper. There are also bosses made from marble and crystal, and the whole is covered in paint and mosaic work.

Above: The screen in Hereford Cathedral 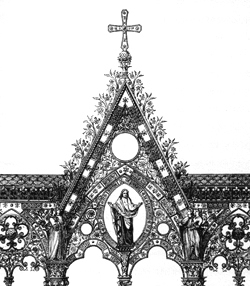 In 1967, amid much controversy, it was removed from Hereford Cathedral on the grounds that it hindered modern liturgical practice. It was dismantled into hundreds of separate elements and boxed into wooden crates, packed with straw and newspapers. Firstly acquired by the Herbert Museum and Art Gallery in Coventry, the screen eventually passed to the V&A in 1983.

Above: Detail of screen design

In 1998 we were asked to examine the screen and produce a detailed specification and budget costing for its full restoration. We produced a 220 page document with detailed condition reports on the metal, wood and mosaic elements. This document was later used as the basis for the tender document. It also included specifications for the restoration, photographs, the results of paint analysis to enable the original colours to be reproduced exactly, and a breakdown of all the budget costings for the completion of the entire restoration and installation in the V&A’s metalwork galleries.