Location: Holborn, the City of London

A bronze statue of a Royal Fusilier in battle dress, mounted on a tall Portland stone pedestal plinth with a stepped base, dedicated to both the 1914-1918 and 1939-1945 wars.  We undertook full conservation in 2003 and have carried out annual maintenance on the memorial since then. 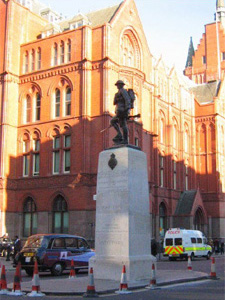 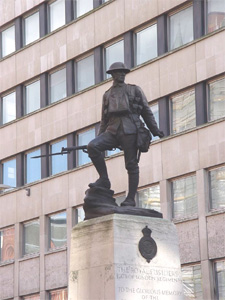 Prior to conservation, the lower inscriptions had worn slightly due to traffic spray, and the carved 1939-1945 numbers were becoming difficult to read. There was also some loss of mortar from the lower block joints. The bronze castings were in sound structural condition but the surface was dull flat black in colour due to heavy black wax on the surface, which disguised the generally green, naturally-formed patination beneath. Overall the monument was dirty, with an overlay of loose dirt and traffic film. 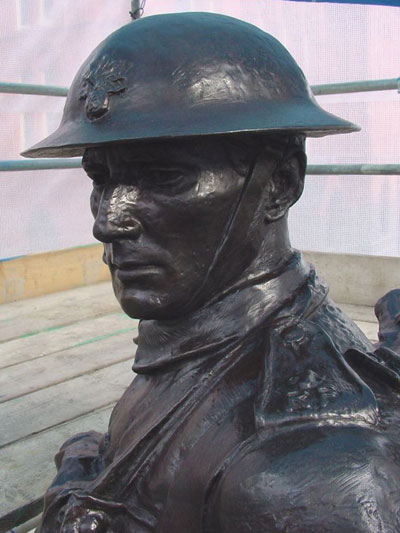 The conservation began with steam cleaning of the bronze work to remove the heavily polluted black wax, followed by selective over patination to change the green to brown, so restoring the colour of the bronze to that which was originally intended.

This was followed by the application of four coats of clear wax, the first coat applied to the bronze after warming with gas torches to allow the wax to penetrate the patina.

The stonework was washed with low pressure water and detergent, and the loose mortar from the damaged joints raked out and replaced with a colour-matched hydraulic lime.

We now maintain the memorial annually. 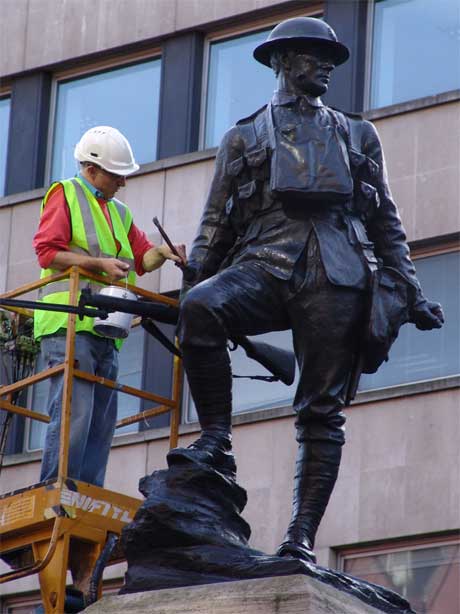 The sculptor Albert Toft (1862-1949) was born near Birmingham, where his father was principal modeller at Elkington, later moving the family to Staffordshire to work for Wedgwood. Young Albert Toft also went to work for Wedgwood, studying at the art school in Henley in the evenings, and then at Newcastle under Lyme. In 1881 he commenced study in London at the National Art Training School, under Lanteri. He set himself up with a London studio, producing first bas-reliefs and apparently doing some black and white work, and then turning to portrait sculpture. From the late 1880s he also made ideal works, rather influenced by Alfred Gilbert.

Toft also designed other memorials, most notably the Welsh National Memorial in Cardiff, and in Birmingham, the South Africa Memorial in Cannon Hill Park and the King Edward Memorial in Highgate Park, as well as figures outside the Birmingham Hall of Memory. He produced three Queen Victoria memorials, in Nottingham, Leamington and South Shields.