THE BURGHERS OF CALAIS 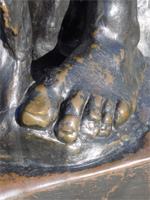 The Burghers of Calais had suffered from inappropriate treatment with heavy black wax for many years, which resulted in the obscuring of much of the finer sculptural form. Its popularity as a tourist attraction also lead to significant wear to the accessible areas of the sculpture, and from time to time the attention of graffiti artists. 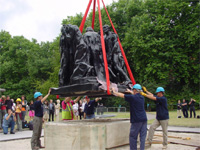 The National Art Collections Fund had donated the sculpture to the nation in 1914, and chose to celebrate their centenary in 2003 by restoring the sculpture. We lifted the bronze from its plinth and transported it to our studio. 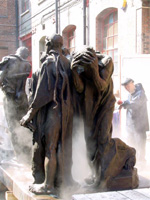 This was followed by high pressure steam cleaning to remove all remaining traces of black wax. 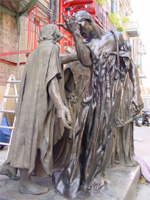 Much of the original brown patina still existed on the surface of the bronze, so the patina was only retouched where necessary. Finally four coats of clear wax were applied to protect the bronze and enhance the appearance of the brown patina. 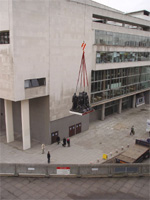 The sculpture was then transported and lifted by crane to the terrace of the Hayward Gallery for the 'Saved!' exhibition, celebrating the National Art Collections Fund centenary. 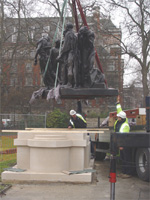 At the end of the exhibition, the bronze was transported back to its original site in Westminster, and secured onto a new Portland stone plinth which we designed to reflect more accurately the design of the original 1915 plinth. 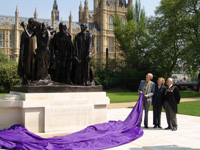 The conserved sculpture was then unveiled by Sir Nicholas Goodison, in spring 2004.

Auguste Rodin (born François-Auguste-René Rodin November 12, 1840; died November 17, 1917) was a French sculptor, often given a pivotal role in the history of modern sculpture, as both excelling at and rebelling from the Beaux-arts tradition. His unique, virtuoso ability to organise a complex, turbulent, deeply pocketed surface set him apart from the figure sculpture traditions before and since his time.