REPLICATION OF PICTURE LIGHTS IN THE GREEN CLOSET, HAM HOUSE

The Green Closet at Ham House, near Richmond, is a seventeenth-century cabinet room - a room designed for the display of small paintings and miniatures. It is rare in that the majority of its original contents remain. In the 1990's The National Trust decided to restore the room and to recreate the spirit of the seventeenth-century arrangement. 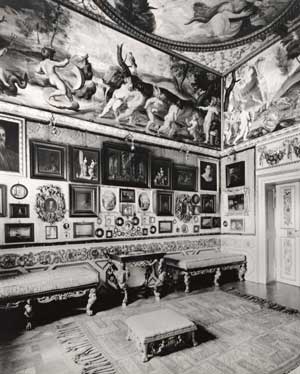 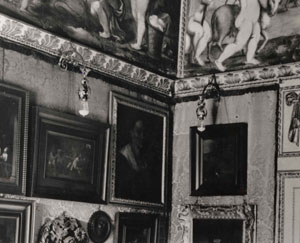 Originally the pictures would have been lit by daylight, together with candles or oil lamps, and were protected by the damaging effects of light by case curtains hung from gilt rods. In 1904 these idiosyncratic electric picture lights (photo below, left) were installed. The lights were lost but fortunately this photographic record c.1920 existed in the archives. We were commissioned to replicated these lights and their unusual lamps.

The project required that the quality of the light be as close as possible to that of the original hand blown lamps. This was achieved by blowing new outer lamp forms in Pyrex glass, leaving the upper end open. The ends of the Pyrex lamps were air abraded and tinted to replicate the originals. The brackets were fabricated from brass tubing and the leaves cast in malleable brass which allowed them to be formed into the correct shape once assembled. 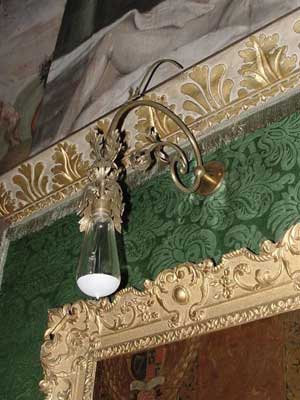 As low voltage power was to be used, we sourced and tested several small, carbon filament, torpedo-shaped lamps to ascertain their intensity of light and colour. The best lamps were found to be those that are used for the interior lights of older models of car.

These were then adapted by soldering long wire contacts to these small lamps which allowed them to be suspended inside the larger Pyrex lamps and to be connected to G4 low voltage fittings at the head of the light brackets. A standard dimmer system was used, which allowed the brightness to be adjusted to give light levels which suited the room at different times of day.

We also made replicas of the gilt curtain rods and the original miniature pins. Originally the miniatures were hung from hooks which were pinned through the damask and sewn in place. Two types of hook survive - black and gold hooks, and larger gilt hooks. Both types were replicated.