PAIR OF DOORS AT THE VICTORIA AND ALBERT MUSEUM

This pair of doors stand in the doorway to the Lecture Theatre Building at the V&A. Designed by Godfrey Sykes, the principle designer of the South Kensington Museum (now the V&A), the doors were modelled by two of his pupils from Sykes' drawings after his death in 1866. 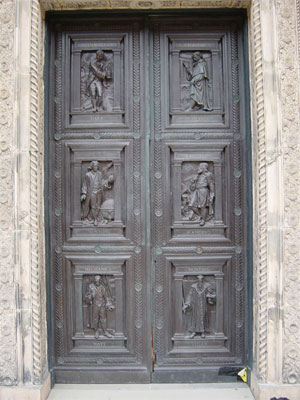 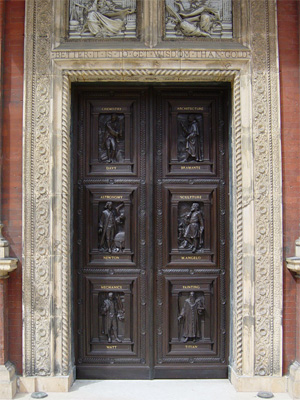 Originally the doors were leaf gilded, and records show that the gilding was still in place in 1899, however at some point after that the worn gilding was replaced by a patinated finish with gilded lettering only.

Prior to conservation, the doors were displaying significant signs of severe deterioration, in particular warping and damage to the wood. The electrotype panels were ill fitting and showed various signs of damage including long splits, cracks and holes. Several small sections of electrotype were missing. The kick plates were badly damaged and some cast brass mouldings were also missing. Over the years, various onsite repairs to the copper work had been made in an attempt to prevent the panels from deteriorating. The copper surface showed signs of extensive corrosion with pitting and green corrosion deposits which had developed as the protective coating degraded. The doors were removed to the studio for more detailed examination. Once the panels had been removed from their fixed position upon the doors, the full extent of their deterioration became apparent. Without the supportive rigid wooden structure, the panels themselves were quite fragile and structurally unsound. More splits and cracks were evident, especially inside sharp angled sections (a common problem with sculptures and objects made by the electrotype process). 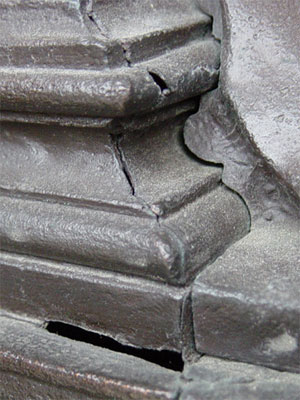 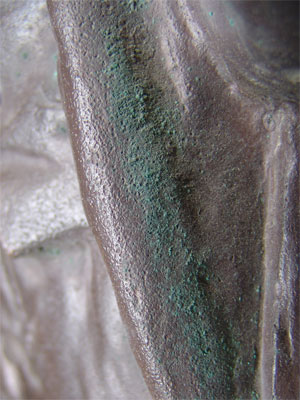 The reverse side of the panels showed us many old repairs, most of which had failed by this time. These old repairs were done with small lead pieces and lead soldering. Several small areas had repairs which had been done using epoxy/filler type adhesives. It was obvious that these panels had been removed from the doors at least twice in the last fifty years or so. Each panel consists of two pieces - one being the portico and surrounding decorative framework, the other being the figure panel itself. The copper deposit on the figure panels was much thicker that that on its surrounding frame. 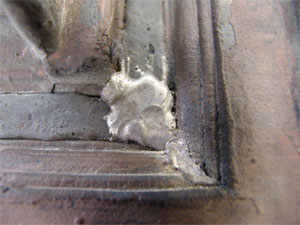 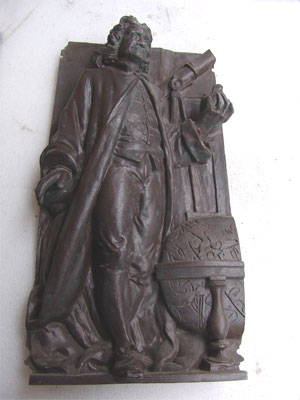 On removal of the bolts, some of the original plaster backing could still be seen inside some of the figures.

To begin with, the warping of the wooden doors was addressed, then they were cleaned and consolidated, and all door furniture, bolts and plates were refitted and replaced as necessary to make good all the functioning parts.

Then work began on the electrotype panels. All polish and lacquer was removed with acetone and paper towel. When the figure panels were cleaned it was noted that several elements had been cast separately in brass and soldered into place after the electrotype panel had been formed. Other pieces, this time made from copper, had also been applied in the same manner. 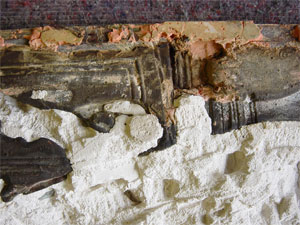 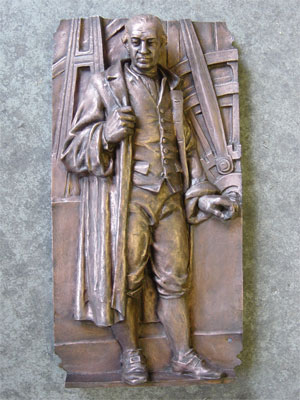 One portico frame section had a substantial section missing completely from one corner (see photo left). Wishing to replace this part with material of exactly the same nature, a mould was taken from an area of the same design and a new piece was made by the electrotype process and soldered into position. 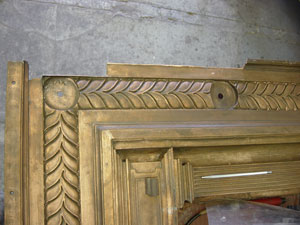 Then the metalwork was repatinated to its original rich brown colour using traditional chemicals. Once the correct colour had been achieved, the individual panels were given two coats of lacquer to provide a sealed, protective coating. Next, one coat of clear wax was applied before the figure panels were bolted back into their respective porticos.

More wax was then applied to create a renewable, protective coating which can be maintained as required. 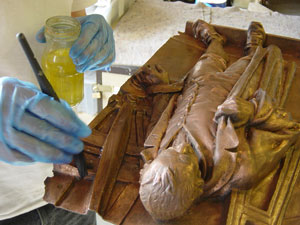 The lettering was prepared with size and given two layers of 24 carat English gold leaf.

The panels were then put back upon the wooden doors and secured into position by the large brass roundels and a selection of small brass screws. 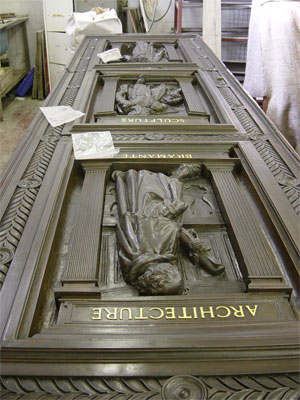 The doors were then reinstated in their original position at the Victoria & Albert Museum. 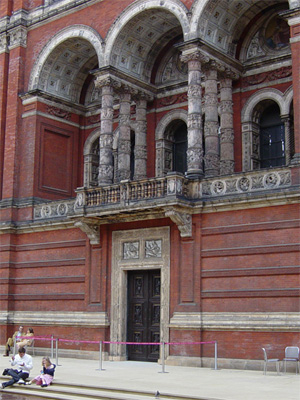