EQUESTRIAN STATUE OF KING GEORGE I 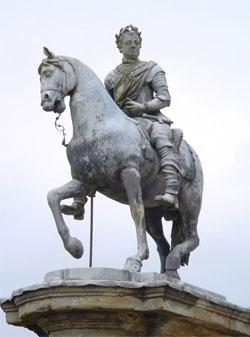 This statue had undergone two known major restorations - once in 1957 and again in 1972. Inappropriate materials and methods had been used and the sculpture had become unstable and was leaning to one side.

A bronze bar prop had at some point been placed below the chest of the horse to try to prevent its collapse.

There were many cracks, distortions of form and areas of collapse throughout the sculpture. 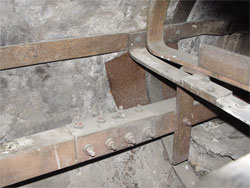 In 1972 the internal frame in the body of the horse had been replaced with a bolted bronze frame which was connected to the iron armature in the legs. Our internal inspection showed poor connection between the leg armatures and the body framework that did not impart adequate structural stability to the armature as a whole. 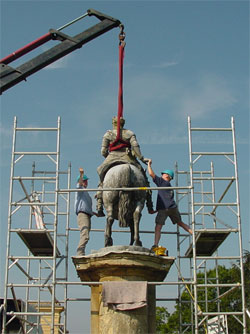 To correct the misalignment and the structural problems, the sculpture was removed to the studio.

Some areas of the original lead work showed signs of possible past use of paint. Paint samples were taken prior to conservation work starting. However, it is not current National Trust policy to repaint lead sculpture as it is difficult to be sure of both the time of past painting and colour. Also repainting carries with it significant future maintenance costs and implications associated with long-term application of paint. 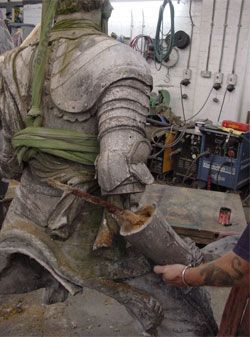 At the studio, the horse and figure were dismantled to enable the removal of the earlier, failed armatures and to allow the insertion of a new, integral, stainless steel armature.

We discovered that the square brass bar replacement armature which was inserted within the legs and ran up into the body of the horse, had been set in place by entirely filling each of the three legs that support the horse with poured molten lead. We had to melt away all this lead poured around the bars in order to remove the brass bars from the legs and create enough space for us to insert the new stainless steel armature. 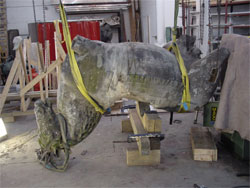 The only way of achieving this without damaging the outer skin of the sculpture was to cut each leg into seven short sections, whereby we could carefully melt the lead core from both ends. 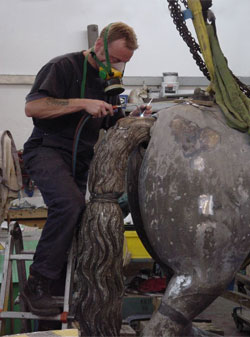 The new stainless steel armature was constructed within the horse and figure.

The sculpture was then reassembled and access patches put back in place by lead burning.

The leaning posture of the horse was corrected as part of the reassembly process.

The repairs were then worked back and fine finished to match the existing surface, and the repaired areas disguised with a thin wash of casein-based watercolour paints. As these paints slowly wear off in an outdoor environment, they are replaced by natural patina. 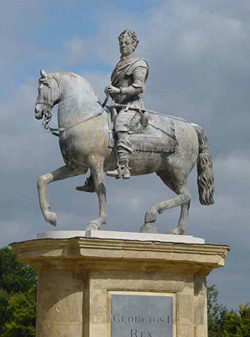 The sword, baton and parts of the bridle and bit were replaced and/or re-fitted.

Finally, the horse and figure were reinstated and security fixed onto a new Portland stone slab to replace the heavily damaged top portion of the original plinth.

Unpainted lead requires little maintenance – monitoring of condition and an annual wash will usually be all that is required. 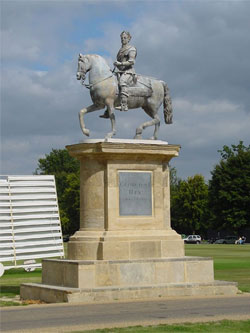 Also known as Andrew Carpenter, Carpentiere (c.1670-1737) was of Flemish origin. He became principal assistant to John Nost in London but soon set up his own studio, eventually establishing a foundry at Hyde Park Corner, close to other lead manufacturers. For some time he enjoyed the patronage of the Duke of Chandos.