A PAIR OF WINGED HORSES

This pair of zinc horses was sculpted by Hugo Hagen and manufactured by M. Czarnikow & Co. of Berlin. 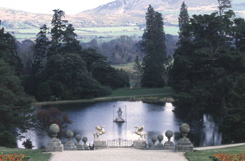 Poor previous repairs had made the joints unsightly, and the iron armatures within the hind legs had rusted and expanded, causing joints in the legs and bases to split. 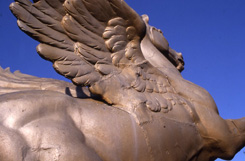 The iron armatures were replaced with stainless steel, and extensive repairs made to all the joints.

The surface was then filled where necessary, primed and painted, and the horses reinstated on their plinths.

Hugo Hagen (1818?-1871) was born in Berlin and studied under Wichmann. He became assistant to Rauch in about 1840 and finished his master's works after his death. He produced a number of works in Berlin and Leipzig including a bronze figure of the Count of Brandenburg, however he worked mainly in marble and plaster.