A GILT AND SILVERED BRONZE MIRROR BY BARBEDIENNE 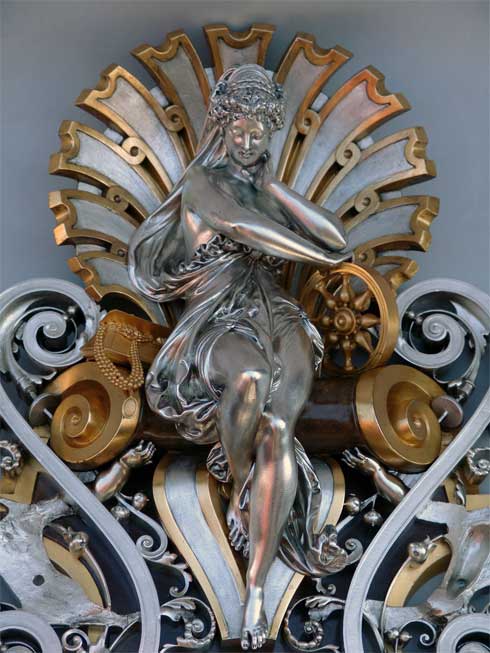 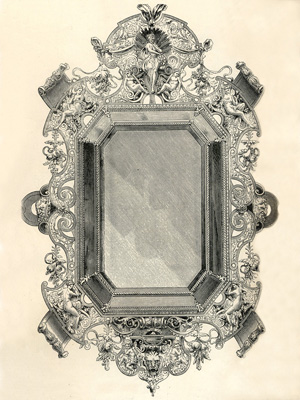 Engraving from the catalogue of the Universal Exhibition 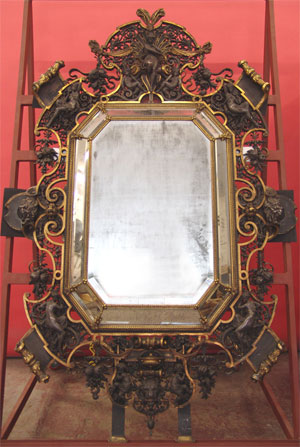 Prior to conservation, the mirror frame was structurally in sound condition. The surface was heavily tarnished, giving the object a radically different appearance to that originally intended by the designer. The silver-plated bronze elements were heavily tarnished and had at least one coat of post-construction lacquer which had been applied without diligent cleaning. This had trapped dirt below the lacquer and added to the dull blue-grey appearance. The gilded bronze elements were predominantly in good condition except in areas where original gilding had failed to take or at corrosion points in jointed areas and corners exposed by failed lacquer. The appearance was dull and dusty with some areas of light copper carbonate corrosion. 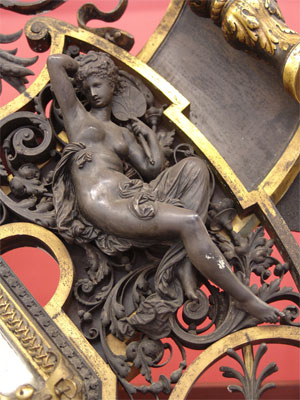 The patinated plates were generally in sound condition but disfigured predominantly by failed lacquer and dirt. Some damage to the surface had occurred on the larger, exposed areas where handling had thinned the patina. 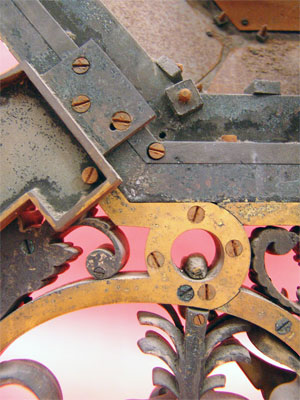 The iron screws, pins, dowels, support bars and cover plates were all showing signs of superficial rust, particularly the machine screws. However this did not affect the structural integrity of these elements. The support bars and cover plates showed signs of rust where surface coatings had failed over time. This had also not affected the structural strength of the iron. The mirror frame was very carefully dismantled. As each piece was removed, it was tagged and annotated. 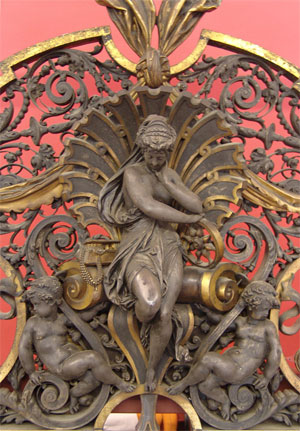 Solvent tests were carried out with the decayed surface coatings. These revealed that there was a considerable thickness of old lacquer on the surface, some of which must have been applied post-construction as there was dirt trapped within it. 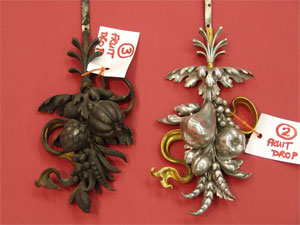 The old lacquer was then removed, revealing that there was certainly no controlled oxidisation of the silver and that, while visually disfiguring, the lacquer had done a very good job of protecting the surface over the last 150 years. Heavy tarnish only appeared in deep recessed areas where the lacquer had been missed or had failed. 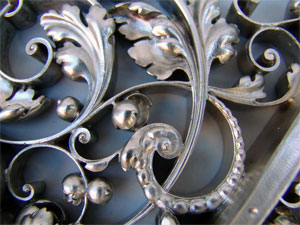 Tarnish was removed from the silver. The final step prior to degreasing was a light burnish with a silver cloth. 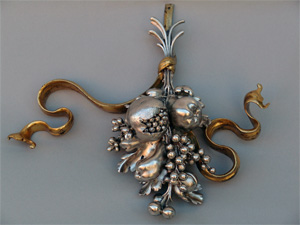 Corrosion on some parts of the gilded bronze elements of the frame was obvious and pitted, as were the partially gilded sections on the patinated bronze pieces. Corrosion was removed, then the surface burnished with a silver cloth prior to degreasing. 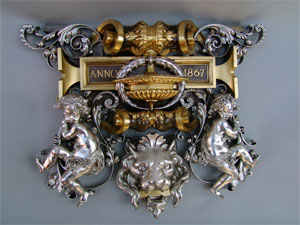 On the patinated bronze areas small areas of damage were retouched and then prepared for lacquering. 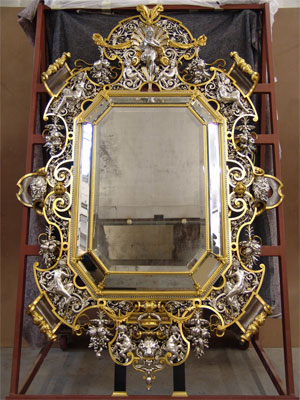 Lacquer was then applied by the brushing technique or by a dipping method using diluted lacquer in Acetone to ensure total coverage. The frame and the more vulnerable sections were given two coats. The iron support brackets and fixings were all cleaned using wire wool to remove loose rust. The larger components were then painted with a rust converter and matt black paint, while small screws were treated and waxed as they were returned to the structure. The mirror glass pieces were reinstalled using an inert polyester batting behind an acid-free paper buffer, to prevent the frame rubbing against the delicate mercury-mirrored back.

Ferdinand Barbedienne (1810-1892) was a manufacturer of bronzes and furniture, based in Paris. In 1838, the he entered into partnership with Achille Collas and started to manufacture bronzes. His new firm, under the name of Collas & Barbedienne, specialized in antique reproductions and developed new processes for patinations and colored bronzes. The firm became France's leading manufacturer of artistic bronzes. By 1847 he had established a factory for the production of bronzes in Paris, where in addition to sculptures he produced silver and reproduction furniture in a variety of styles. Barbedienne worked from his own designs as well as those of other leading artists. He was always interested in artistic and technical innovation. When Barbedienne died on March 21, 1892 the number of his workers exceeded 600. Gustave Le Blanc, the nephew Barbedienne had taken as a partner, succeeded him under the name of Le Blanc-Barbedienne. Le Blanc signed a contract with Rodin to ensure the Company's exclusive right to cast 'Eternal Printemps' and 'Baiser' for 20 years. Furthermore, in 1895 he executed the casting of the first proofs of the 'Bourgeois de Calais'.